UP CM expanded his cabinet ahead of Assembly polls 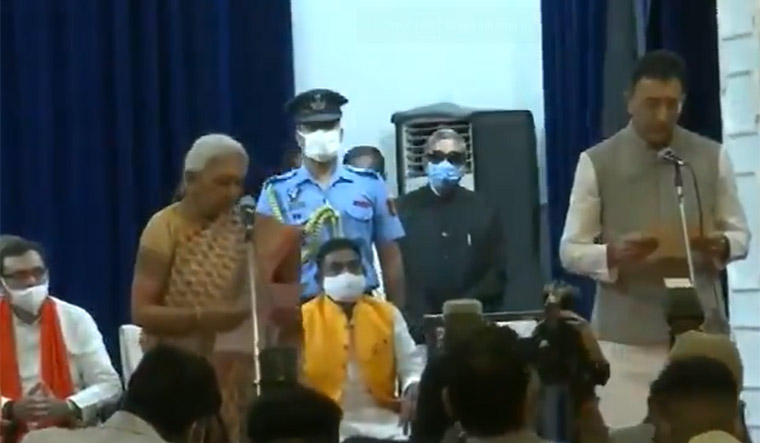 The long-awaited expansion of the Yogi Adityanath ministry happened finally and somewhat unexpectedly on Sunday evening.

The caste balance of the expansion--one Brahmin, three OBCs, two SCs and one ST--clearly indicates the priorities of the BJP as it gears up to face elections in early 2022.

Jitin Prasada, the most well-known of the new faces, got a cabinet minister berth while six others became ministers of state.

Prasada, a long time Congress man, won his first election to the Lok Sabha in 2004 and enjoyed a second term in 2009 from Shahjahanpur. He lost the 2014 Lok Sabha election, the 2017 UP Assembly election and the 2019 election to the Lok Sabha. He has been minister of state for steel; petroleum and natural gas; road transport and highways, and human resource development. His exit from the Congress came after a long period of discontent. His induction is a nod to the fact that the BJP needs to win back the Brahmin vote which is somewhat disenchanted with it.

Sanjeev Kumar is a Gond tribal who is MLA from Obra in Sonbhadra--one of the very few districts in the state that has a tribal population. He is educated upto class 10. He is an outspoken member of the party who has brought up the issue of illegal mining which reached epic proportions under the previous SP government, repeatedly.

Sangeeta Balwant, an MLA from Ghazipur holds a post doctoral degree. The daughter of a postman, she lists writing and poetry as her hobbies. Her political career started as a zila panchayat member. She has previously said that her inclination towards politics was born in her student days and she is of the view that till women’s participation in politics is not enhanced, they will not get the benefits. She is a member of the Mallah community which is an OBC.

Dharamveer Singh Prajapati is also an OBC who belongs to the Kumhar caste. He was appointed chairperson of the Maati Kala Board (a body to promote handmade products) in this government. His political initiation started with the RSS. In 2002 he was made in-charge of the state BJP’s backward caste cell. He is a member of the state’s legislative council.

Palturam, a member of the Scheduled Caste, is a party MLA from Balrampur. He holds a post graduate degree and lists agriculture and contractor as his professions. In 2018 he faced a spot of notoriety for calling up a chief medical superintendent of a district hospital in Balrampur and abusing him. His political journey started with the panchayat elections of 2000.

Chhatrapal Gangawar, is a Kurmi MLA (OBC) from Baheri. Like Palturam, he too has a viral audio to his name wherein he allegedly threatened a man to return his money or else that he would forcibly have his sugarcane crop cut. He holds a post graduate degree and has a Bachelor of Education degree. He first got a ticket for the assembly election from the BJP in 2002 but lost. This is his second stint as an MLA, the first being in 2012.

Dinesh Khatik, a member of the Scheduled Caste, is a party MLA from Hastinapur. He is a first time MLA from BJP. His father was a member of the RSS--a tradition that Khatik also followed. He owns brick kilns. He is a popular leader in his constituency, known for a number of development works he has executed. Among his most talked about statements is making Hastinapur into another Chandigarh.

Missing from the list was Arvind Kumar Sharma, a Gujarat cadre IAS officer close to PM Narendra Modi. Sharma, who had in January 2021 taken voluntary retirement and joined the BJP, was at one time touted to be installed as a deputy chief minister, in addition to the two who already exist.

After the brief swearing in ceremony at Lucknow’s Raj Bhavan, the CM and governor Anandiben Patel gave roses to the new inductees- most of whom were seen touching Yogi Adityanath’s feet thereafter.

Though murmurs about an expansion of Yogi Adityanath’s ministry have long been doing the rounds, these had become particularly strong in the recent weeks. It was also speculated that an expansion would not happen during the pitra paksh- an inauspicious time in the Hindu calendar which will last till October 6. Instead, it would happen in the nine-day auspicious period of Navratri that immediately follows after the current period wherein offerings are made to deceased ancestors.

Ever since Sunday morning when news of the expansion started to trickle in, there were also some guesses about it not happening in the inauspicious Rahu Kaal period of the day- which according to some calculations was to last till 6.13 pm on September 26.