New Parliament building to be ready in 2022: Speaker Om Birla 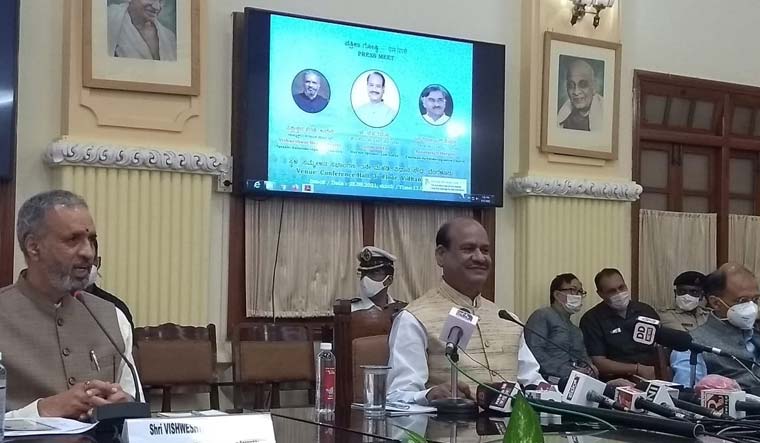 The new Parliament complex will not only represent the diverse cultures of India but have the latest technology to enhance the efficacy of the Parliament and the Parliamentarians, Lok Sabha Speaker Om Birla said on Saturday. He said the new building will be ready in 2022.

Interacting to the press in Bengaluru, Birla said a possible increase in the number of Lok Sabha and Rajya Sabha seats over the next 100 years has factored in the planning of the new complex.

He expressed concern over the diminishing standard of discipline, decorum and decency in the legislatures and said a conference of presiding officers in Shimla scheduled for next month hopes to draw up a comprehensive action plan to improve the efficacy and credibility of parliamentary democracy.

"The Shimla conference in October will mark the centenary year of the first Presiding Officers' Conference held in 1921 at Shimla, which will be attended by presiding officers, chief ministers of states and other stakeholders. We hope to chalk out plans to make democratic institutions more vibrant and pro-people," he added.

Stressing on the need for "collective responsibility" to ensure the House is in order at all times, Birla said, "Every member of the ruling party and the opposition should ensure there is no disturbance, but only debate in the House. There is a need for setting a healthy tradition of debating. The uniqueness of Indian democracy is that any dissent, disagreement and different opinions are respected as we believe it strengthens democracy. But every debate has to take place within the decorum of the House."

Another grave concern is the quality of debates in the Parliament and the Assemblies, admitted the Speaker stating that PRIDE (Parliamentary Research and Training Institute for Democracies) had initiated training programmes for capacity building of elected representatives from Panchayats to the Parliament.

"Within six months, a database of all the Parliament and Assembly debates on important bills will be made available in both English and Hindi digitally as all our libraries will be interconnected. Soon, the House proceedings of central and state legislatures will be accessible on a single platform. The members need to study the bills, access the documents available in our libraries to prepare for the debates," said Birla.

Sharing his opinion on the 'One nation One Election' proposals, Birla said, "It has been debated in the Parliament through a private member bill. Many Assemblies have been debating it. However, I believe the outcome will be better if all the political parties debate and discuss the issue before arriving at a consensus. Our work is to ensure a healthy debate on the issue in the House."

Birla expressed regret that many bills were being passed without much debate. "The bills are tabled after the parties arrive at a consensus during the BAC. However, many times, the bill is passed without any debate or discussion, which is a matter of concern. There cannot be a substitute for a healthy debate in a democracy," said Birla.

Answering a question on the presiding officers' neutrality, Birla said that it was wrong to make baseless allegations against the chair. "The presiding officer might have been elected through a political party, but the chair he occupies is apolitical. In Parliamentary democracy, there is a provision to move a motion against the Speaker if you are aggrieved by his conduct. But making baseless remarks on the chair is not acceptable or fair."