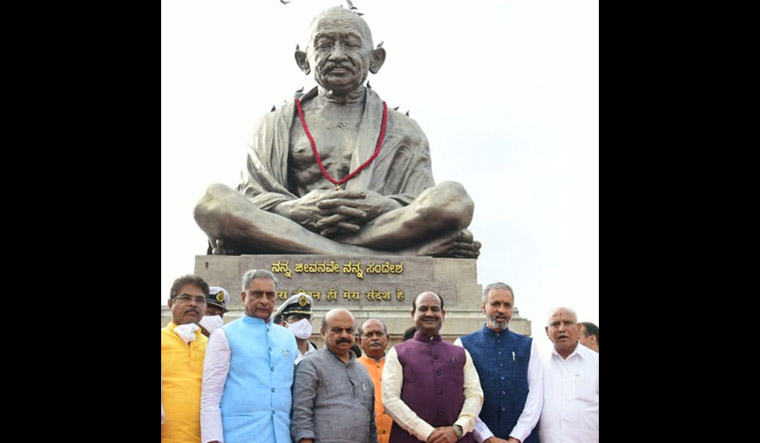 A day after the Congress party boycotted the address of Lok Sabha Speaker Om Birla in the Karnataka Assembly citing violation of House rules, Assembly Speaker Vishweshwara Hegde Kageri slammed the opposition, saying such events have been held on earlier occasions, too. Birla addressed the state Assembly on Friday to mark the 75 years of India's Independence.

Congress Legislature Party leader Siddaramaiah and KPCC chief D. K. Shivakumar had contended that only the President of India and the Governor could address a joint session of the state Legislature and alleged that the BJP government was setting a new precedent.

"First of all, it was not meant to be joint session as I had adjourned the House sine die on Friday afternoon even before the address. It was an event hosted by the state Secretariat for the members of both Houses and the MPs. As far as the issue of utilising the Assembly hall goes, this is not the first time the state Assembly has hosted such an event," said Kageri pointing that on June 20, 2002, when SM Krishna was the chief minister, then Lok Sabha Speaker Manohar Joshi had addressed the presiding officers' conference inside the Assembly hall.

Further, Kageri informed that the All India Presiding Officers' conference held in Kevadia in Gujarat was chaired by Lok Sabha Speaker Om Birla and Prime Minister Narendra Modi had delivered the valedictory speech. During the meet it was decided to chalk out programmes for the state Assemblies to help strengthen the democratic system.

"The Lok Sabha Speaker has addressed the UP Assembly in Lucknow and Rajasthan Assembly in Jaipur. Earlier too, (former Lok Sabha Speaker) Sumitra Mahajan has addressed the Gujarat Assembly.  So it is neither against the Constitution nor a new tradition started by us. In fact, it is a programme designed by people responsible for upholding the Constitution and meant to further strengthen the democracy. It is a constructive effort. However, those who are opposing the programme certainly lack information," said Kageri, who asserted that the Speaker and the Council chairman being the custodians of the two Houses were well within their powers to host the event in the Assembly and no one had the right to interfere in the affairs of the House.

Expressing regret over the Congress boycotting the event, Kageri said, "We have been constantly striving to  enhance the quality of debates and House proceedings in Karnataka through many initiatives. This time, too, I discussed the programme (address by Birla) with the Congress leaders personally and during the Business Advisory committee meeting too. The same was conveyed in the House too. They all had assured me of extending support to the programme, which is indeed a matter of pride for the Karnataka legislature. But on the eve of the event, the Congress announced they are going to boycott the address and were adamant even after I requested them to attend it," lamented Kageri.

Birla clarified that it was the prerogative of the Assembly speaker to host the programme and in the last 100 years there had been ample examples of the Lok Sabha speaker addressing the state Assemblies.