66% of India's adult population administered at least one dose of COVID-19 vaccine: Govt 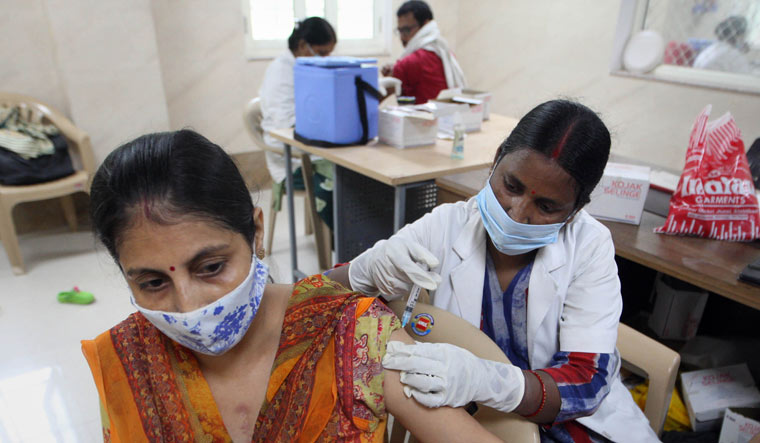 The Centre on Thursday said 66 per cent of the country's adult population has been administered at least one dose of COVID-19 vaccine, while 23 per cent has received both the doses.

Addressing a press conference, Union Health Secretary Rajesh Bhushan said 63.7 per cent vaccine doses have been administered in rural areas and 35.4 per cent in urban areas.

A total of 68.2 lakh doses (approximately 0.95 per cent) has been administered at Covid vaccination centres not tagged as rural or urban, he said.

The cumulative number of COVID-19 vaccine doses administered in the country has crossed 84 crore, according to the data from Co-WIN portal.

Bhushan said from May 1 to September 22, roughly 6 per cent doses have been administered in private hospitals and the remaining have been given in public health facilities.

"Two-third of India's adult population (66 per cent) has been vaccinated against SARS-CoV 2 and almost a quarter of the adult population has received two doses, and you can see in both these parameters there are states and UTs which have done so much better than these averages. It is a very important milestone in its own way in the line of other milestones that you are aware of," NITI Aayog member (Health) V K Paul said.

The vaccines, he said, are providing protection against serious diseases and against mortality in a big way and therefore, it is a matter of satisfaction that the coverage is now phenomenally significant.

"We are urging those who are eligible but not taken their vaccine - men and women, pregnant women and everybody more so those who are of higher age in particular above 50 years should get their first and second dose so that they can get complete protection and we could overcome this pandemic," Paul underlined.

He said 100 per cent of the frontline workers have been administered the first dose, while 80 percent of them have been given the second dose.

According to the data shared, the average daily doses administered in a month has increased from 19.69 lakh in May to 39.89 lakh in June, then further to 43.41 lakh in July and to 59.19 lakh in August.

The average daily vaccination in September so far has been 81.60 lakh per day, the health secretary said, adding that nearly 18 crore doses have been administered in 22 days of September.