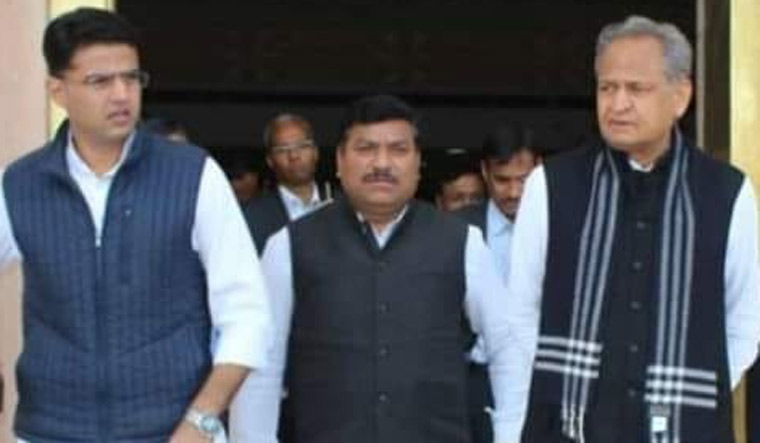 An uneasy calm has been prevailing in the Congress government in Rajasthan between the factions of Sachin Pilot and Chief Minister Ashok Gehlot.

That differences remain was made evident on Tuesday when an MLA considered to be a Pilot loyalist claimed the police did not lodge an FIR over a complaint filed by him in January.

Ved Prakash Solanki was among 18 MLAs loyal to Pilot, who camped with the former deputy chief minister in Haryana last year as the factional rivalry came out into the open.

Solanki alleged on Tuesday some women were sending him video clips to blackmail him. "Such conspiracies are going on for the last several months. Women are sending videos, so that I can be blackmailed. They can do anything. They can do anything to suppress my voice. They can go to any extent. But I will continue to raise the voice of the youth, poor and dalits," Solanki said.

Solanki claimed he had filed a complaint at the Bajaj Nagar Police Station in Jaipur on January 26, The Indian Express reported. "I've filed a police complaint after I received videos from some women but no FIR has been registered," Solanki was quoted as saying by ANI.

Without specifying any person or group, Solanki said, "They can do anything. Anything can happen to suppress voices," The Indian Express reported.

The Indian Express quoted Ajay Pal Lamba, Additional Commissioner of Police, Jaipur, as saying an FIR was not registered as the commission of a crime could not be established. "The Deputy Commissioner of Police, Jaipur East, issued a statement saying that there had been just one call from the mobile number concerned, and the address of the person to whom that number belonged to was found to be wrong. The officer also said that Solanki’s statement had been recorded in April, and they were still probing the matter," The Indian Express reported.

Solanki's ties with the Congress had frayed after the Congress candidate in the recent Jaipur Zilla Parishad elections had moved to the BJP.

Rama Devi, the candidate for Ward 17, which falls under Chaksu, the constituency of Solanki, had been miffed with the Congress for not giving her candidature for the post of Zilla Pramukh. Following the incident, Govind Ram Meghwal, a Congress MLA who oversaw the election, had accused Solanki of orchestrating the incident.

Not surprisingly, the BJP latched on to the statements by Solanki, alleging there was an attempt to honeytrap the Congress MLA. BJP MLA Vasudev Devnani was quoted by The Indian Express as saying, "The Chief Minister can go to any extent to harass his rivals. Earlier, he had called his former party president as ‘nakara, ‘nikamma’. I think the Congress high command is responding to Sachin Pilot. That is why, his team members are being harassed.”