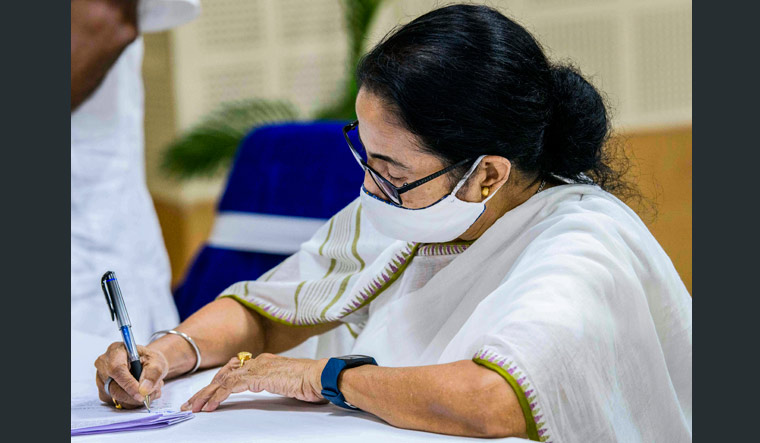 West Bengal BJP on Tuesday lodged a complaint with the Election Commission, saying Chief Minister Mamata Banerjee had not disclosed five criminal cases pending against her in the nomination papers for the Bhabanipur by-poll. Sajal Ghosh, the chief election agent of BJP candidate Priyanka Tibrewal, has written a letter to the Returning Officer, saying Banerjee has suppressed facts in her affidavit.

He said since Banerjee has not mentioned these details in her affidavit, her nomination papers should be rejected.

"I beg to object to the nomination/declaration filed by Mamata Banerjee… on the ground that the candidate has failed to disclose particulars of the pending criminal proceedings against her," he said.

By-poll in Bhabanipur is scheduled on September 30 and the votes will be counted on October 3.

Banerjee, a resident of Bhabanipur, had won the seat in 2011 and 2016. But this time she had shifted to Nandigram, the scene of the 2007 anti-farmland acquisition movement against the erstwhile Left Front government which had catapulted her to a major political force in the volatile state.

This change of seat was done to dare her former protege and now BJP leader Suvendu Adhikari on his home turf. As it turned out Banerjee led TMC to a resounding victory for a third straight term in office but she lost in Nandigram.

Banerjee is required to win a seat in the state assembly by November 5 in conformity with the constitutional provisions in order to continue as chief minister. The Constitution allows a non-member of a state legislature or Parliament to continue in a ministerial position without getting elected only for six months.

After her defeat in Nandigram, Sovandeb Chattopadhyay, state cabinet minister and TMC MLA from Bhabanipur, vacated the seat to facilitate her return to the assembly from there.