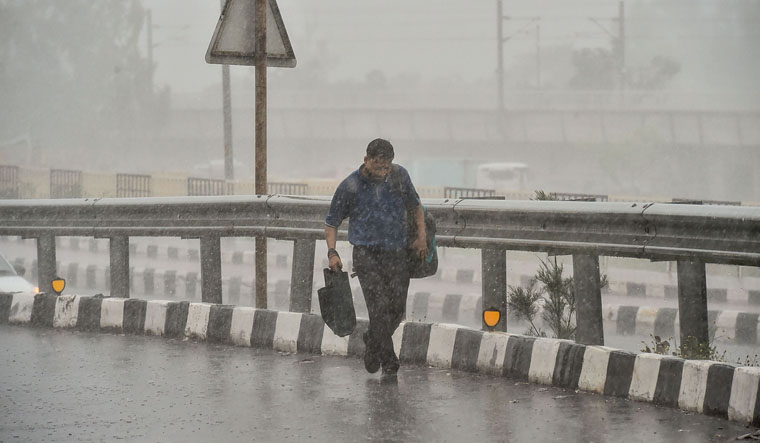 Heavy rains lashed the national capital Saturday morning, leaving the forecourt of the Delhi airport and other parts of the city waterlogged.  The Delhi airport said on Twitter here was waterlogging at the forecourt for a short period. "Our team was immediately aligned to look into it and the issue has been resolved."

In a video on Twitter purportedly showing waterlogging in Madhu Vihar, some DTC cluster buses could be seen standing in the water, and other commuters manoeuvring their vehicles through the inundated road.

Officials of the Public Works Department (PWD) said the filed staff is on the ground to pump out water from streets.

"Due to heavy rain in the early morning [on Saturday], waterlogging occurred at a number of places. We are tackling those issues on priority. Our staff is present round the clock to monitor the situation," a PWD official said.

The Delhi Traffic also posted tweets informing people about the stretches where they are expected to witness waterlogging.

"Traffic Alert. Traffic is heavy due to water logging at GGR/PDR. Kindly Avoid the Stretch," it said in a tweet around 11am.