Many people seen wading through water to reach the entry gate 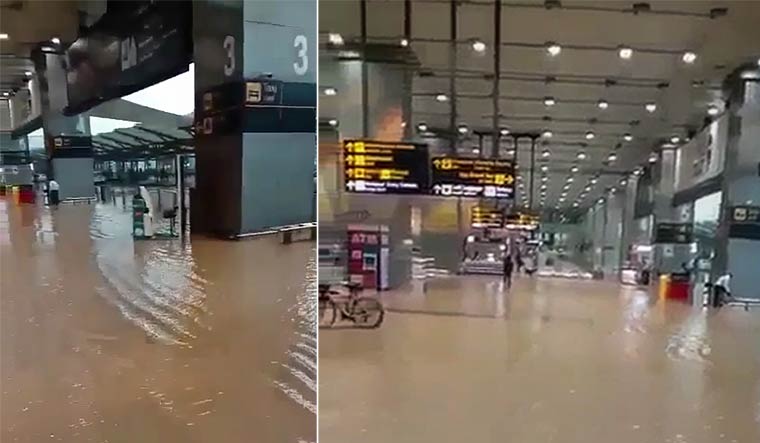 The forecourt of the Delhi airport was waterlogged, three flights were cancelled and five diverted to Jaipur and Ahmedabad as heavy rains lashed the national capital early on Saturday morning.

Various videos of the Delhi airport were posted on social media sites that showed cars submerged in water in the forecourt.

The videos also showed people either wading through the water to reach the entry gate of the airport or standing on raised areas to avoid water.

Aviation Minister Jyotiraditya Scindia said on Twitter he spoke to airport officials and "was told that the waterlogged forecourt was cleared up within 30 minutes".

The Aerocity area -- which houses multiple luxury hotels -- near the airport was also waterlogged in the morning with people trying to maneuver their cars through the accumulated water, showed another set of videos.

In a statement, the spokesperson of Delhi International Airport Limited (DIAL) said the airport operator has been requesting the state and the central government agencies for the past few years to widen the underground drainage system that goes from Terminal 3 to Najafgarh.

"Delhi has been witnessing record-breaking rains since last evening. This morning, due to sudden extremely high downpour, the forecourt of Terminal 3 of Delhi Airport saw some waterlogging, which cleared within a few minutes," the spokesperson stated.

The primary reason for rainwater moving towards Terminal 3 is the steep land gradient slope of about 17 metres between NH8 (National Highway-8) and Terminal 3, the spokesperson said.

"Due to this steep gradient, the entire area between NH8 and Terminal 3 acts as a catchment and drains water towards the terminal. This water is eventually carried by the city's underground drainage system from Terminal 3 to Najafgarh drain," the spokesperson noted.

This drainage system from Terminal 3 to Najafgarh drain requires widening, the spokesperson said.

"DIAL has been working with state and central government bodies and officials for the past few years requesting to widen this underground drainage system," the spokesperson said.

"Several discussions in this matter have already taken place. We hope the drainage system would be widened soon," the spokesperson said.

Earlier during the day, DIAL said on Twitter that "due to sudden heavy rain, for a short period, there was waterlogging at the forecourt".

"Our team was immediately aligned to look into it and the issue has been resolved," it added.

Operations have been back to normal since 9 am, the DIAL said.

Sources said five flights were diverted from the airport this morning due to bad weather conditions.

Four domestic flights -- two of SpiceJet and one each of IndiGo and Go First -- were diverted to Jaipur. One international flight -- Emirates flight from Dubai to Delhi -- was diverted to Ahmedabad, sources said.

They also said three IndiGo flights which were scheduled to depart from Delhi were cancelled due to bad weather.

Waterlogging was reported from several parts of the national capital, including Moti Bagh and RK Puram in south Delhi, after rains lashed the city Saturday morning.

An official of the meteorological department said the national capital received 97 mm rainfall since Friday morning.