BJP announces election in-charges for 5 poll-bound states: Pradhan to lead charge in UP 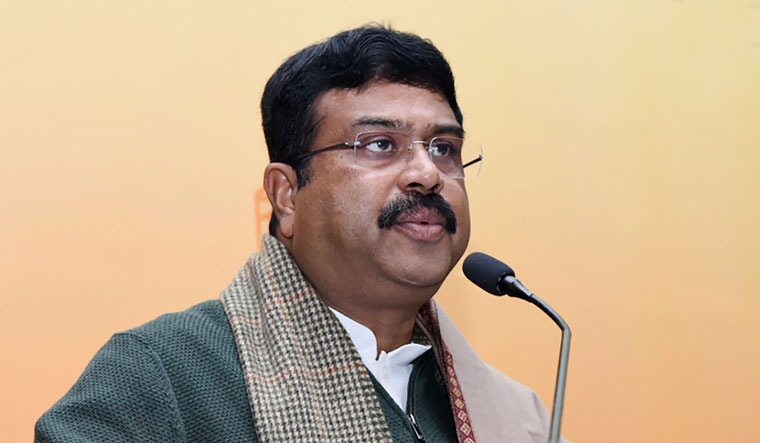 Union Education Minister Dharmendra Pradhan, veteran organiser of many state polls, will manage BJP's elections in Uttar Pradesh. He will be assisted by seven other senior party leaders, including ministers. The BJP announced the list of election in-charges for poll-bound states like Uttar Pradesh, Uttarakhand, Manipur, Goa and Punjab. Union Minister Gajendra Chauhan will be election in-charge for Punjab, Environment Minister Bhupender Yadav for Manipur, while Parliamentary Affairs Minister Prahlad Joshi will deal with Uttarakhand. In the list announced, BJP has appointed six cabinet ministers, and five ministers of state hailing from those four states. For Goa, the BJP has appointed former Maharashtra chief minister Devendra Fadnavis as in-charge, while MoS G. Kishan Reddy and MoS Darshana Jardosh are co-incharges.

As the countdown for the elections to be held in February-March next year have begun, the BJP has made these appointments to formally begin preparations. These elections will test the popularity of four first-time BJP chief ministers: Yogi Adityanath (Uttar Pradesh), Pushkar Dhami (Uttarakhand), N. Biren Singh (Manipur), and Pramod Sawant (Goa).

The politically important Uttar Pradesh is of particular interest to the party, as BJP's performance there will lay the foundations for 2024 Lok Sabha elections. So, Uttar Pradesh has the biggest team of leaders to manage elections.

The BJP is facing certain difficulties following the second wave of COVID, which claimed a large number of lives in the state. The party also has to manage the disquiet among various caste groups in the state. In the neighbouring Uttarakhand, Cabinet Minister Prahlad Joshi will be assisted by Lok Sabha MP Locket Chattarjee and national spokesperson R.P. Singh.

For Manipur, where BJP had its first government in the state, Yadav will be assisted by MoS Pratima Bhaumik, and Assam minister Ashok Singhal.

For Punjab, where BJP is facing stiff opposition from the farmers groups on the issue of three contentious farm laws, and is contesting the elections on its own for the first after breakup of alliance with Akali Dal, the party has appointed three leaders to manage the campaign. Jal Shakti minister Gajendra Chauhan will be assisted by cabinet minister Hardeep Puri, MoS Meenakshi Lekhi, and Lok Sabha MP Vinod Chawda.