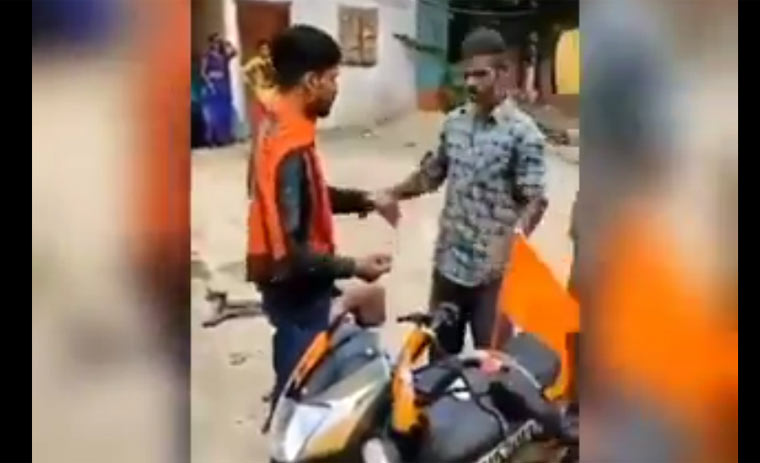 In a series of videos displaying mob action, especially those with communal colour, surfacing in Madhya Pradesh, two more clips went viral late on Saturday night and Sunday morning leading to widespread condemnation and also a political war of words between the BJP and the Congress.

Among the two latest videos is the one of a Muslim door-to-door scrap dealer being forced to chant ‘Jai Shree Ram’ in a village in Mahidpur of Neemuch district, while in another a youth is seen being mercilessly beaten up on the suspicion of theft in Rewa town. Both incidents occurred on Saturday.

Police have registered cases and arrested two accused each in both the cases, the superintendents of police of Neemuch and Rewa have said.

These videos came close on the heels of a heinous act of a tribal man being tied to a vehicle and dragged, leading to his death, in Ujjain. The incident occurred on August 26, but the video went viral on Saturday, causing huge uproar and leading to the arrest of five accused. On Sunday, the illegal house of one of the accused was demolished by the Neemuch district administration.

On its part, MP Congress chief Kamal Nath set up a committee of five MLAs led by ex-Union minister Kantilal Bhuria for fact-finding on the incident.

Earlier, videos of mob action from Indore had also surfaced during the week. In one video, a Muslim bangle seller was seen being beaten up (later he himself was booked under POCSO Act), while in another a Muslim vendor from Dewas was seen being assaulted. Two other videos of persons being beaten up and one person being forced to lick spit by violent groups in Satna were also surfaced.

Even as three videos went viral across social media in the course of two days attracting a lot of censure from users across the country, a political war of words emerged in the state.

Ex-chief minister Digvijaya Singh posted multiple tweets on the incidents on Sunday likening the incidents in MP to Talibani culture. He also questioned the role of the chief minister and said it was he (Chief Minister Shivraj Singh Chouhan) who was protecting the criminals and if it was not so, he (the CM) would have sought the resignation of home minister (Narottam Mishra) already.

Singh further said, “When BJP people show the audacity to upload the videos of lynching of people of a particular community in Talibani manner on social media, it sends out a message that the government is ours and we will not be harmed. And that is what happens. The ones who are beaten up are themselves turned into accused.”

Medical Education Minister Vishvas Sarang, who is also a government spokesman, said that the government is taking immediate cognizance and police are taking action in all these incidents, but one of the points of investigation is also whether the flurry of such videos was a Congress conspiracy. Talking to media persons, he said that it has to be probed whether the videos were fabricated or the incidents were pre-planned to defame the government and the majority community. Sarang said that Congress was known to stoke class struggle and divide communities for political gains. He asked why such videos land up with the Congress first and why they are made viral from Congress handles?

Retorting, Congress spokesman Narendra Saluja said that the minister was asking why the videos of the incidents were coming to Congress first. “Government is yours, police is yours, you are the minister and if the videos are coming to Congress first, you have no right to remain on your post. Anyway, the videos are being released on social media by the perpetrators of the incidents themselves with the aim to create an environment of fear and terror. Also media alertness is bringing the incidents to fore,” Saluja said in a series of tweets.