VIDEO: Shocker from MP, as tribal man dies after being beaten, tied to van and dragged

Five people have been arrested so far 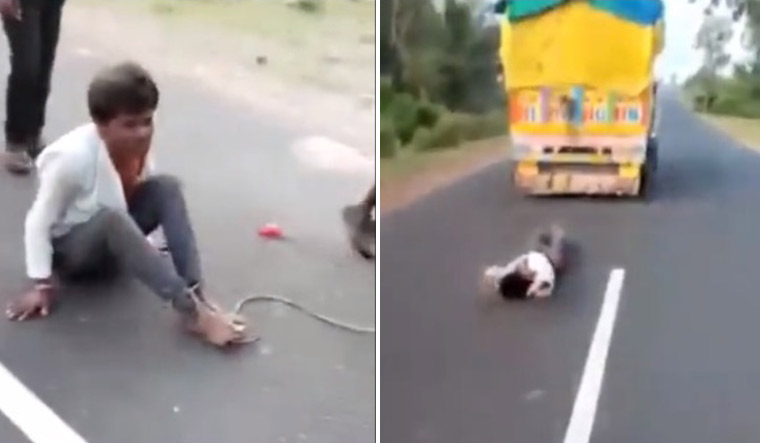 Screengrab from the video shared by Kamal Nath

A tribal man in Neemuch district of Madhya Pradesh died after being beaten up, tied to a pickup van and dragged on the road. A video of the incident that occurred on August 26 went viral on social media attracting widespread condemnation.

On Saturday, the Superintendent of Police of Neemuch, Suraj Kumar Verma, said that a case of murder under Indian Penal Code and atrocities under the SC/ST Prevention of Atrocities Act, has been registered against eight identified accused and five of them have been arrested. Also, the vehicles, including the pickup, have been seized by the police and police are searching for the other three accused, the SP told mediapersons.

Ex-chief minister and MP Congress chief Kamal Nath has called the incident inhuman and attacked the state government saying that anarchy is reigning in the state and criminals have no fear of law even as the government is totally missing from the scene. “I demand that immediate steps should be taken to prevent such incidents, strict penal action taken against culprits and rule of law established in the state,” Nath tweeted.

The ex-CM also referred to recent incidents in Satna, Indore and Dewas (of mob assaulting a person) to make his point. A youth was beaten up and forced to lick spit in Satna; a bangle-seller was assaulted in Indore (later an FIR was registered on the bangle seller, too) and another door-to-door vendor was assaulted in Dewas in incidents over the past week.

According to police sources, the FIR says the victim, Kanhaiyalal alias Kanha Bhil, was looking for his wife, allegedly missing since the previous night on the Neemuch-Singoli Road under the Ratangarh police station. Even as he was standing on the road looking at the passing vehicles in search of his wife, he collided with a speeding motorcycle of main accused Chhitarmal Gurjar, 32, a resident of Patan. Due to the collision, both fell and the milk in the containers on the motorcycle of Gurjar split.

Kanhaiyalal’s friend Govind Nai (the complainant) who was with him escaped as Chhitarmal called up his friends after the incident. Later, Kanha was beaten up, tied to a passing vehicle and dragged for a few metres, police sources said. He sustained grievous injuries in the process and succumbed at the Neemuch district hospital later.