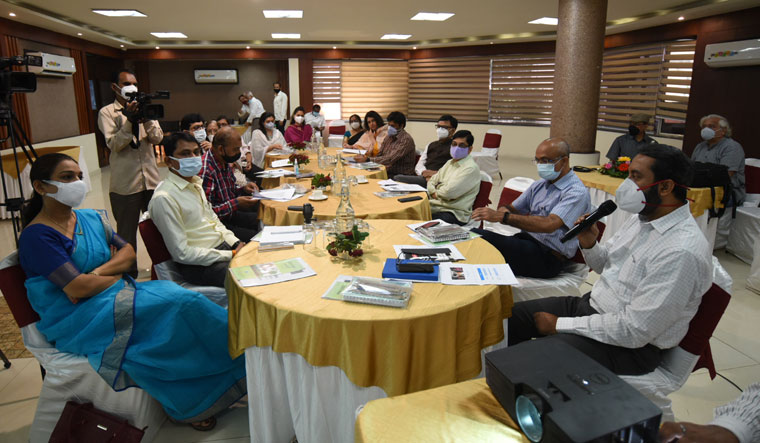 Political divides were breached as representatives of various parties in Madhya Pradesh came together in Bhopal on Wednesday to discuss the issue of the learning crisis due to COVID-19 and reopening of schools.

Along with child rights functionaries, educationists and media representatives, the politicians unanimously suggested setting up of a task force for reopening of schools and to find ways to address the learning crisis and prevent dropouts.

They also suggested devising a mechanism to provide psychosocial support to the children and a focused approach for tribal and rural kids, especially those below poverty line.

Nirmala Buch, president CROMP, strongly advocated the need to reach out to children who have gone missing from the education scenario due to COVID-19 and to focus on learning, not just opening of schools.

F.A. Jami, education specialist, UNICEF, spoke on the efforts of the state government on school education during COVID-19, challenges faced by children, including digital reach, and stressed on having longer bridge courses of 12-18 months duration for those who have missed education link, efforts to make sure that all children are reached out to and take specific steps to prevent dropout.

Vishnu Khatri, BJP MLA from Berasia, Bhopal, said the government is committed to children and aware of the challenges faced by kids in rural areas mainly due to digital availability and connectivity issues. He said the government will reach out to children when schools open up and help those who are left out. He shared how villages in his area got 100 per cent vaccinated.

Brajesh Chouhan, member of SCPCR, said the government will have to connect children to school when they open, prevent dropouts and focus on making special courses for children as learning due to the digital medium has its challenges. Director of Rajya Shiksha Kendra, Dhanaraju S, listened to all the suggestions and concerns and responded to the issues raised. He also shared the initiatives of the government.

School Education Minister Inder Singh Parmar has indicated that offline classes for geades I to VIII might start from September. Currently, classes for 9th and 10th grades are conducted one day a week and those for 11th and 12th, twice a week.