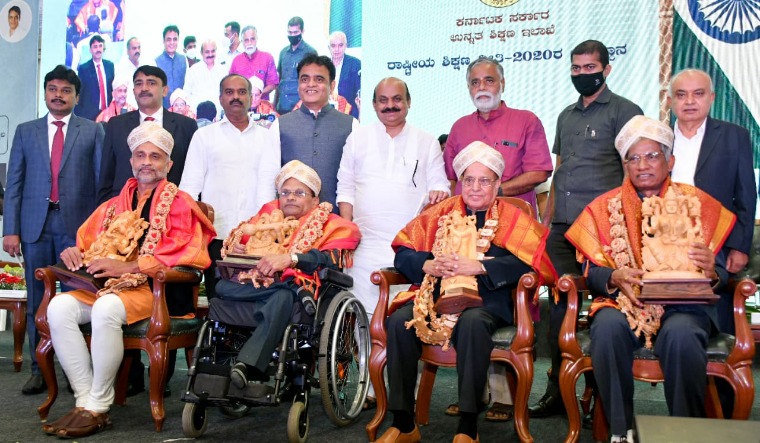 India will create a new global order through the National Education Policy, which will unfold with focus on its four pillars—accessibility, affordability, equity and quality—said Union Education minister Dharmendra Pradhan, who inaugurated the implementation of NEP in Karnataka virtually on Monday.

"India should move from being a knowledge society to a knowledge economy. And given Karnataka's legacy and intellectual prowess, I am confident the state will be a success," said Pradhan, who congratulated NEP drafting committee chairman Dr K. Kasturirangan, members M.K. Sridhar, Professor Kattimani and Professor Anurag Behar, and the Karnataka government for being the first state to implement NEP.

Pradhan stated that the primary challenge of the NEP was to bring the 170 million population under the framework of the policy. "NEP is meant for the age group of 3 to 23 years and the country has 520 million of this population. The combined capacity of the anganwadis, schools and higher education institutions is around 350 million. So, we know there is a population of 170 million in the target group that is outside the purview of NEP. And each year, 25 million are getting added to this target group too," said Pradhan who exuded confidence that Karnataka would be a role model to the rest of the country.

"Karnataka is the epicentre of the knowledge ecosystem of India and the state holds one per cent of the total global population and I am confident the state will be successful in implementing NEP. Karnataka being the IT hub will help in digitalisation, which is the primary strategy of NEP," said Pradhan, adding that the NEP implementation in India would set a global standard and be a global case study for its consensus building through wide consultations, for its policy framework, implementation strategy and expected outcomes.

Chief Minister Basavaraj Bommai called the NEP 2020 a "revolutionary step" that dares to make fundamental changes to the system. "Currently, education is only a department and is divided into compartments. Education exists in vertical silos, giving little room for creativity and freedom. The academic burden denies us future talents like painters or musicians… NEP liberates us from the current education system by making it student-centric," said Bommai, who hailed Prime Minister Narendra Modi for his vision and for daring to change the status quo.

The chief minister also announced a slew of new policies to complement and expedite the implementation of NEP. "As the world is moving towards digital knowledge, we foresee the need to introduce a new digitalisation policy, which will connect the villages through broadband network. The first-year degrees (students) will be given iPads. A primary and secondary education council will be constituted and career guidance and personality development will be made part of the curriculum for class 8 students to instil confidence in the youngsters. With Karnataka housing 180 globally recognised research and development units, I urge the taskforce to include liaising of students (institutions) and the industry to build a knowledge-oriented community," said Bommai. He also assured adequate budget allocations for the implementation of NEP in the state.

Earlier, Higher Education Minister Dr Ashwath Narayan asserted that education and skill development were the sole equalisers in society and quality education alone could boost the growth in economy and society.

"Our PM envisages India to be a $5 trillion economy in the next five years. Of this, the knowledge sector contributes $1 trillion and Karnataka's share is about 35 per cent. We have already made a beginning and there are 3.5 lakh curated content (master classes) to make education accessible to everyone anytime and from anywhere. Internationalisation of education is the key. We have introduced unified university college management system and comprehensive learning management system in higher education. We have revamped polytechnic education by offering 41 new specialisations," said Dr Ashwath Narayan.