Members of dalit community entered the temple on July 30 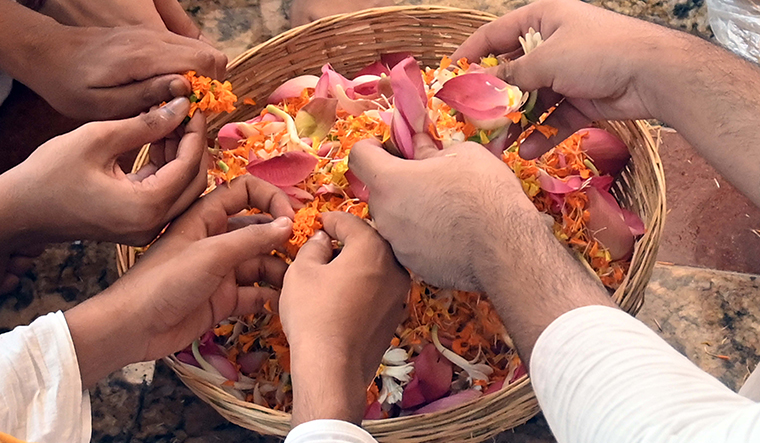 Forty-year-old Kamala Lakshmanan is a happy woman now. But Kamala has not celebrated her happiness as her friends and relatives have warned her of consequences and asked her to ensure her safety. As a woman who had served with the Home Guard for over five years, Kamala till a few days ago had never felt that celebrating happiness would earn her the wrath of the people of her own village.

Kamala had led a historic fight of around 130 dalit families at Anaiyur Kokkulam village near Thirumangalam in Madurai to restore their traditional right to enter the Arulmigu Pekkamman Karuppasamy temple. Their fight saw success on July 30 after members of the dalit community entered the shrine.

Kamala, right from her childhood, had always felt the discrimination like her fellow villagers, but never wanted to start a movement or protest against it. But it all began a few weeks ago when one of her brothers, Anbalagan came down from Bengaluru with parents to offer prayers at the temple.

Anbalagan and his parents were verbally abused for getting into the temple, even though it was their family deity. “We can only offer prayers to the deity from outside. We were never allowed to get into the temple by our own Parayar priest,” says Kamala.

While there are several other temples in the six surrounding villages in Thirumangalam district, the dalits were not allowed to enter only the Pekkamman temple. “I have always asked my ancestors on this. They would only say that we can’t enter as it will invite the wrath of the deity,” says Kamala. She says the Piramalai Kallars, the most backward class group, who are considered caste Hindus in the region claimed the temple to be theirs. There was stiff resistance from the Piramalai Kallars against the temple entry of the dalits even on July 30. The priest fled the place and refused to perform pujas, saying the entry of the dalits will only “anger the gods.”

Kamala and her relatives belong to Kovilveetu Paraiyar, a subcaste in dalits, who won’t be allowed to mingle with the other members of the same dalit community in the locality. While Anbalagan decided to take his fight against the discrimination forward, Kamala went to the Madurai bench of the Madras High Court seeking justice. She filed a petition seeking a direction to the district administration to facilitate the entry of the dalit families into the Pekkamman temple.

The court asked the Madurai district administration to submit a report on the temple entry row. Following this, Thirumangalam tahsildhar A. Anandakrishnan sought a clarification from the Hindu Religious and Charitable Endowments (HR and CE) Department, Madurai, on the status of the temple. The HR and CE Department then clarified saying that the temple was situated on government poramboke land and that it was a HR and CE temple. The department also said that Pekkamman temple is classified as a “small temple” as per the government procedure.

More than the temple entry, the issue also pertains to the land and other assets of the temple. In his reply to HR and CE, Deputy Commissioner M. Vijayan clarified that the Pekkamman temple and the two wells on its premises are located on 2.07 hectares of government land as per the land records. “We were not allowed because the Piramalai Kallars think that we will stake claim for the temple assets, too,” says M. Chinnasamy who led the temple entry along with others on July 30.