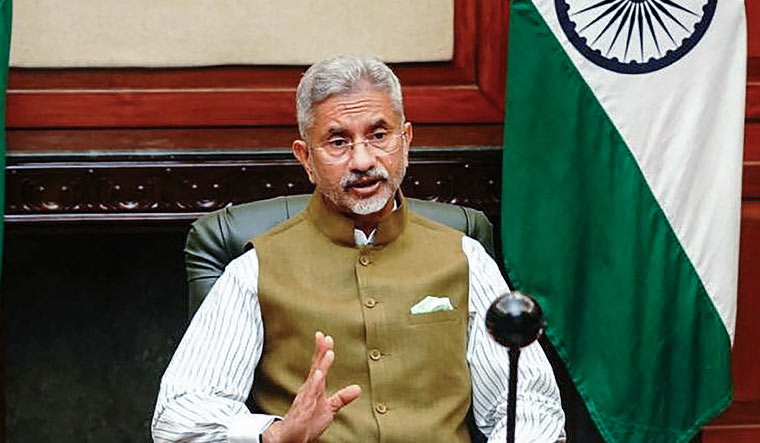 India and the US stand united in addressing the scourge of terrorism and supporting regional economic connectivity through transparent development of infrastructure, while ensuring respect for sovereignty and territorial integrity, External Affairs Minister S Jaishankar said on Thursday in a veiled jibe at Pakistan and China.

He said the two sides are together in opposing terrorist safe havens, countering terror-financing and strengthening cooperation against terrorist threats from groups, including those in India's immediate neighbourhood.

In a written reply to a question in the Rajya Sabha, Jaishankar said the India-US partnership is one of the major relationships in the world and the cooperation between the two countries is evident in the common commitment to address contemporary issues such as terrorism, climate change and pandemics.

The external affairs minister's comments came a day after he held wide-ranging talks with US Secretary of State Antony Blinken with a focus on the Indo-Pacific engagement, COVID-19 response and economic recovery and the situation in Afghanistan.

In his written response, Jaishankar said India and the United States have a comprehensive, strategic and global partnership based on shared democratic values and convergence of interests on regional and global matters and the relations have seen a steady growth and development after 2014.

"Relations between India and the US have seen steady growth and development after 2014. This has extended over three administrations in the US. The India-US relationship is today one of the major relationships of the world and there is widespread appreciation of the significance of this relationship and the fundamental convergences therein," he said.

Jaishankar also referred to a joint strategic vision of the two countries for the Asia-Pacific and Indian Ocean regions that calls upon all parties to avoid the threat or use of force and pursue resolution of territorial and maritime disputes through peaceful means and in accordance with international laws, including the UN Convention on the Law of the Sea.

"To this end, India and the US are committed to respecting freedom of navigation, overflight and commerce throughout the region and the need to resolve territorial and maritime disputes peacefully and in accordance with international laws," he said in comments seen as directed at China.

China's military assertiveness in the South China Sea as well as in the larger Indo-Pacific region has been a matter of considerable concern for leading global powers.

Jaishankar said India and the US support bolstering regional economic connectivity through transparent development of infrastructure and the use of responsible "debt-financing practices", while ensuring respect for sovereignty and territorial integrity, the rule of law and the environment.

There has been growing global criticism of China's Belt and Road Initiative (BRI) as Chinese financing has resulted in rising debt in several countries where infrastructure projects under the mega programme are being implemented.

"India and the US stand united in addressing the global scourge of terrorism, inter alia by opposing terrorist safe havens, countering terror financing and strengthening cooperation against terrorist threats from groups, including those in our immediate neighbourhood," the minister said.

"There are regular consultations on domestic and international terrorist designations listing proposals," he added.

Jaishankar said the global partnership between India and the US is evident in their common commitment to address contemporary issues.

"The India-US relationship is today one of the major relationships of the world and there is widespread appreciation of the significance of this relationship and the fundamental convergences therein," he said.

Jaishankar identified healthcare and COVID-19 response, the digital innovation ecosystem, energy, knowledge and education and strategic and defence collaborations as the key priorities of the ties.

"Healthcare has emerged as an important sector of collaboration during the COVID-19 pandemic. India's timely supply of critical medicines and protective gear to the US last year was well received," he said, adding that the US government and private sector deployed substantial consignments of critical medicines and oxygen-related equipment for India to combat the second wave of the pandemic.

Jaishankar said the rapidly expanding commercial and economic linkages form an important component of the multi-faceted partnership and that the US is among India's largest trading partners and a major destination for its exports of goods and services, with the balance of trade in New Delhi's favour.

"As global non-proliferation partners, the US has expressed strong support for India's early membership in the Nuclear Suppliers Group and has supported India's accession into the MTCR, Wassenaar Arrangement and the Australia Group," he added.

"India-US relations are on a strong footing, given the deep-rooted cooperation, shared values and interests. The leadership in both countries is committed to consolidating the relationship and global partnership in the coming years," he said.

The external affairs minister said India and the US also work together under the aegis of the Quad framework.