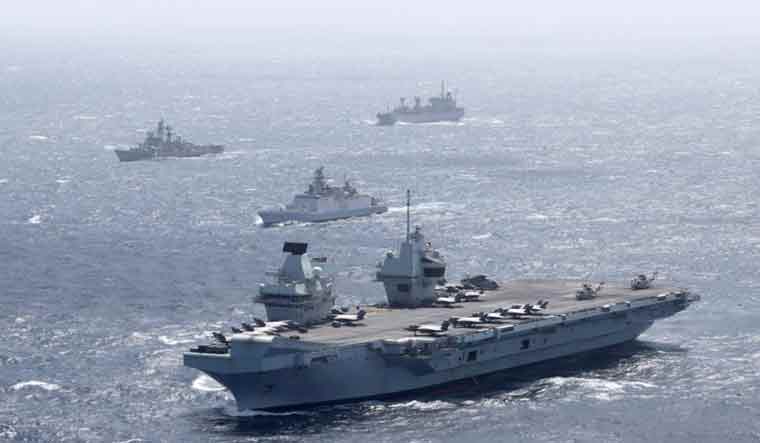 Both navies conducted close-quarter maneuvering and a wide range of multi-ship, air, sea, and sub-surface maritime evolutions, too. While, the Indian Navy was represented by INS Satpura, Ranvir, Jyoti, Kavaratti, Kulish, and a submarine, the Royal Navy was spearheaded by the carrier battle group which has six Royal Navy ships and a submarine, a US Navy destroyer, a frigate from the Netherlands and 32 aircraft, and is manned by 3,700 sailors, aviators and marines from the combined forces of the UK, US and the Netherlands. The exercise also included the P8I—a long-range maritime reconnaissance aircraft capable of anti-submarine warfare. The exercise also witnessed the maiden participation of the F-35B Lightning which operates from the deck of HMS Queen Elizabeth.

Now, the UK's CSG is moving towards the South China sea. HMS Queen Elizabeth is on her first deployment since commissioning in late 2017, which indicates Britain's renewed emphasis on security in the region and concern about the Chinese navy's growing power. Interoperability of Indian and UK navies will be aimed to counter the Chinese PLA Navy (PLAN), which is expanding its region. It is estimated that China has over 100 warships and submarines that are capable of operating in the Indian Ocean and coupled with bases in the region, the Chinese navy may offer a viable deterrent to would-be enemies, according to senior Indian navy officials.

As per the Royal Navy, such exercises enable both forces to advance their interoperability and cooperation ahead of further exercises when the Carrier Strike Group (CSG) returns to the Indian Ocean in the autumn. Other wargames are planned in October after touring the Indo-Pacific. A tri-service exercise is planned with the Indian military off the coast of Goa and then to Karwar, where CSG Elizabeth will make a port call.

The UK has recently come up with an integrated review on security, defence, and foreign policy which identifies India as a key partner. The UK has also announced that it will permanently deploy its two patrol vessels to the Indo-Pacific region.

Indian Navy believes that at any given time there are between six and eight PLAN warships in the northern Indian Ocean, which is a clear indication of rapid expansion in the region. According to the Royal Navy, both the UK and India are in the midst of a carrier renaissance, with the CSG spearheading the UK’s Joint Expeditionary capability. "The joint endeavour provides tangible security to our friends and a credible deterrence to those who seek to undermine global security," British High Commission in New Delhi said in a statement.

An Indian warship, Indian Navy Ship (INS) Tabar is already on its way to Russia to take part in the celebrations of the Navy Day of Russia. After Russia, INS Tabar will also exercise with the Royal Navy off the coast of the UK in August. The ship had sailed from India last month and reached Russia, after exercising with navies of countries, such as Greece, France, and Egypt. This is its maiden operational deployment of Royal Navy CSG, which is sailing over 26,000 nautical miles, and will engage with 40 countries from the Mediterranean to the Indo-Pacific and back again.

At the strategic level, the exercise is a muscular expression of closer defence partnership that prime ministers Johnson and Narendra Modi envisaged in the UK-India Roadmap 2030 agreed to in May.

On the deployment of CSG Elizabeth, Chief of Joint Operations, Vice Admiral Sir Ben Key said: “ It is a symbol of Global Britain in action and showcasing our commitment to India, confronting threats to international order and the Indo-Pacific Region.”.

The deployment of the Royal Navy and Indian Navy meet this month is proof of the strength, energy, and significance of the growing relationship between our navies,” said First Sea Lord, Admiral Sir Tony Radakin, while adding that the two navies will work together in two oceans – starting month within the Indian Ocean as the Carrier Strike Group arrives for the first round of multiple UK-India exercises and later this summer in another exercise in the Atlantic Ocean.”

Interestingly, Indian-origin crewmember Jagjeet Singh Grewal is a Leading Engineering Technician on UK's CSG board and he is working in the Marine Engineering Department. Besides being responsible for maintaining aviation fuel to the highest standard, he is also responsible for the maintenance of the fueling pumps on the flight deck. This will help the F-35B jets, Merlin helicopters, and other aircraft to operate to their optimum capacity. Currently settled in the UK, Grewal has a long family history in the Indian military.

Grewal said, “My grandfather and grandfather-in-law served alongside the British Army in the Second World War and received a Mention in Dispatches, Burma Star, Africa Star, War Medal, and Defence Medal. My father served in the Indian Air force and currently, my wife’s brother and uncle are serving in the Indian Navy," while adding “I am focused on doing my job to the highest standards, but it is good to know I am maintaining my family links while working with the Indian military.”

According to the statement issued by the High Commission in New Delhi, the fifth generation HMS Queen Elizabeth carrier is the largest surface vessel ever constructed in the UK. Taller than Niagara Falls, the 65,000 tonnes carrier’s propellers generate the power of 50 high-speed trains.

India and UK have bilateral exercises vis Ex-Ajeya Warrior for the Army, Ex-Konkan for the Navy, and Ex-Indra Dhanush for the Air Force.

Last month, the UK's International Liaison Officer (ILO), Lieutenant Commander Stephen Smith had joined the Indian Navy's Information Fusion Centre-Indian Ocean Region (IFC-IOR) in Gurugram. He is based full-time at the Centre, working directly with the Indian Armed Forces to enhance maritime domain awareness in the region. The UK's White Shipping Agreement with India enables information sharing across the Indian Ocean Region. Working closely with the Maritime Trade Information Centre in the UK, the ILO will bring this specialist maritime trade operations knowledge to the IFC-IOR.