Another stormy day in Parliament 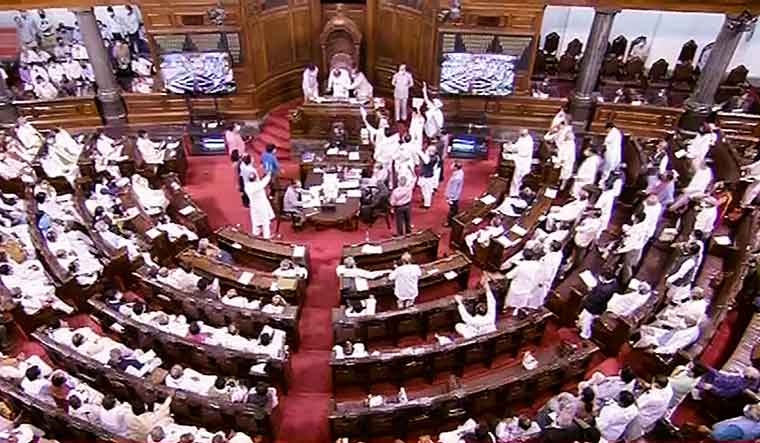 With massive opposition protests in the house, the Lok Sabha was adjourned till 4pm and Rajya Sabha was adjourned for the day. The monsoon Parliament session that opened on Monday has been a stormy affair so far, with the opposition raising all sorts of issues including coronavirus handling to fuel prices, farmer protests and Pegasus snooping case.

The Punjab Congress MPs had staged a protest in front of Gandhi statue in the premises of Parliament, over three farm laws, with the participation of Rahul Gandhi.

Farmers protesting the three contentious farm laws held a stir at Jantar Mantar under heavy security, with Delhi Lt Governor Anil Baijal giving special permission for demonstrations by a maximum of 200 peasants till August 9. The Samkyukt Kisan Morcha (SKM), an umbrella body of farmers' union which has been spearheading the protest against the farm laws, has been asked to give an undertaking that all COVID norms would be followed and the stir would be peaceful.

Although the SKM said that their protest at the Jantar Mantar will continue till the end if the monsoon session of Parliament on August 13, the L-G has given permission for protest till August 9. This is the first time since the violence in the national capital during a tractor rally on January 26 that the authorities have granted permission to protesting farmer unions to hold a protest in the city.

According to an order issued by the Delhi Disaster Management Authority, Lt Governor Anil Baijal, who is also DDMA's chairperson, has given approval for a staggered protest at Jantar Mantar by a maximum of 200 farmers every day from Thursday to August 9 between 11am to 5pm.