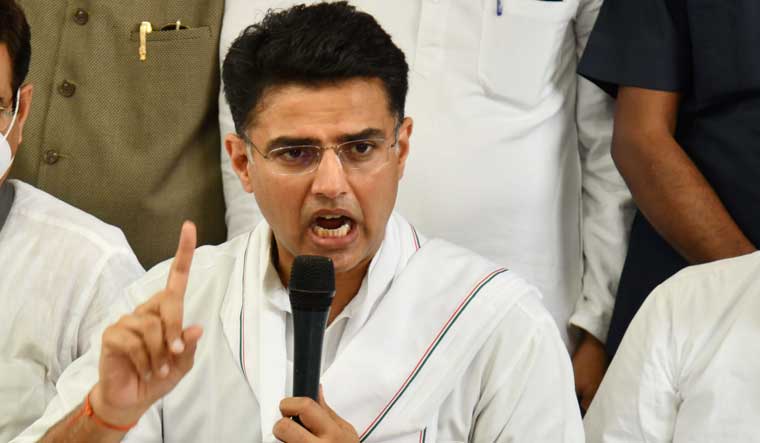 After the Congress leadership's bold decision to appoint Navjot Singh Sidhu as PCC president in Punjab in the face of stiff resistance from Chief Minister Capt. Amarinder Singh, the Rajasthan unit of the party is now abuzz with discussion on whether the party high command would now turn its focus on the infighting in the state.

A tussle for power similar to Punjab, which is also a fight between leaders belonging to two different generations, is currently on in Rajasthan between Chief Minister Ashok Gehlot and his former deputy Sachin Pilot.

The central leadership is viewed as having shown unusual decisiveness in appointing Sidhu as the PCC president, and the development is being seen with a lot of interest in Rajasthan Congress, with supporters of Pilot expecting a similar stance to be adopted by the party high command in the state.

Gehlot's tweet congratulating Sidhu on his new assignment as also AICC General Secretary in charge of Rajasthan Ajay Maken's retweet of a senior journalist's tweet with regard to the Punjab developments generated a lot of interest, with interested parties straining to see any hidden messages.

In an unusually elaborate congratulatory message for Sidhu, Gehlot wrote that it has been the Congress tradition to consult everyone before a decision is taken, and everybody gets a chance to voice his or her views.

After considering all the views, once the party high command takes a decision, all Congressmen accept it and are united, he said, adding that this is the biggest strength of the Congress. He mentioned his Punjab counterpart, saying Amarinder Singh had met Congress President Sonia Gandhi and afterwards had announced before the media that he would accept her decision. He also expressed the hope that Sidhu will follow the Congress tradition and take everyone along.

Gehlot appeared to focus on Amarinder Singh's graciousness even as he extended his good wishes to Sidhu. He hinted on Amarinder's reservations with regard to the changes effected when he wrote that he had had a meeting with the Congress President, but that the veteran leader had announced that he would accept her decision.

Maken retweeted a tweet put out by a senior journalist in which he wrote that any regional satrap does not win a state on his or her own dint. In the tweet was stated that votes of the poor, the weaker sections and the common man are garnered in the name of the Gandhi-Nehru family.

“Be it Amarinder Singh or (Ashok) Gehlot or in the past, Sheila (Dikshit) or anyone else. As soon as they become chief minister, they believe that the party has won because of them,” the tweet read.

The tweet went on to state that the Congress leadership had taken the right decision by appointing Sidhu as PCC chief.

The retweet by Maken was interesting because the Gandhis, through the decisions taken in Punjab, are believed to have asserted themselves in the face of the growing clout of regional leaders. It is being discussed if the central leadership will assert itself in a similar manner in Rajasthan, where Gehlot is said to be resisting calls for rehabilitating MLAs belonging to the Pilot camp by expanding his cabinet and making political appointments.

Another aspect that is common to both Punjab and Rajasthan is AICC General Secretary Priyanka Gandhi Vadra. She had played a key role in getting Gehlot and Pilot to arrive at a truce last year when Pilot had rebelled against the chief minister, protesting against being sidelined. Since she was instrumental in Sidhu's appointment as PCC chief, and is learnt to have assured Pilot that his concerns would be addressed, Pilot supporters expect the central leadership's focus to now turn to Rajasthan.