The chief minister says the party is like ‘mother’ for him 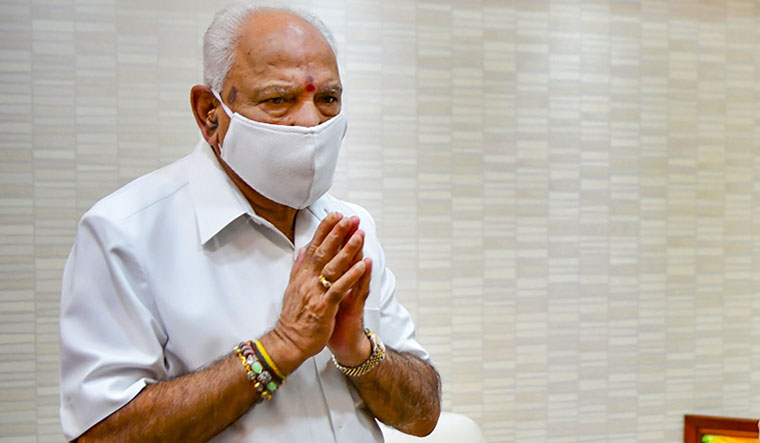 Amid rumours of his possible resignation, Karnataka Chief Minister B.S. Yediyurappa on Wednesday appealed to his supporters and well-wishers not to indulge in any kind of protests or indiscipline that may embarrass the BJP. The Lingayat strongman said the party is like “mother” for him.

"I am privileged to be a loyal worker of BJP. It is my utmost honour to serve the party with highest standards of ethics & behaviour. I urge everyone to act in accordance with party ethics & not indulge in protests/indiscipline that is disrespectful & embarrassing for the party," Yediyurappa tweeted.

In another tweet, he said: "Your goodwill should not exceed the boundaries of discipline.Party is like a mother to me and disrespecting it will cause pain to me. I believe that my true well-wishers will understand and respond to my feelings."

Rumours have gained currency that the BJP is planning to replace the chief minister by July 26 when Yediyurappa completes two years in office. According to reports, the party top brass is considering a few names seriously in the hope of bringing the much-needed "generational shift" in leadership, but without disturbing its core vote bank—the Lingayat community.

However, ever since such rumours started doing the rounds, support has been pouring in four Yediyurappa from various corners. Several political leaders and pontiffs have declared support to him and demanded his continuation as the chief minister.

On Wednesday, a stream of Lingayat pontiffs from across the state visited the CM's official residence 'Cauvery' in Bengaluru, which is being seen as a show of strength by the community. The seers rallying behind Yediyurappa have warned the BJP high command of a "political backlash" by the community if the party decides to remove Yediyurappa as the chief minister.

The pontiffs asserted that Yediyurappa was a "big force" who brought the BJP to power twice in Karnataka. They also warned against unceremoniously removing Yediyurappa saying there would be "no BJP without BSY".

BJP leaders like MP G.M. Siddeshwara and former legislator B. Suresh Gowda have expressed confidence that Yediyurappa will continue as the chief minister.