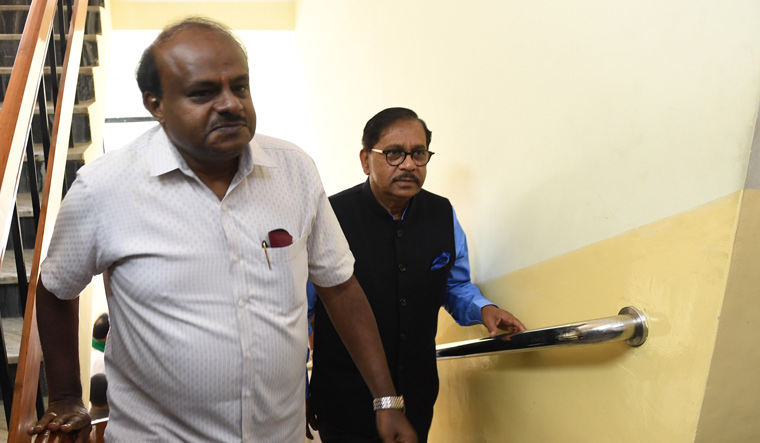 Snooping is one of the many weapons being used on priority by the Narendra Modi government to retain power and to install BJP governments in the states after toppling non-BJP governments, alleged former Karnataka chief minister H. D. Kumaraswamy. Responding to the recent Pegasus spyware attack in the country, he said the “oppressive” BJP is now indulging in human rights violation, too.

"The BJP-led government at the Centre wrongly accused me of phone tapping and conducted a CBI probe. The BJP is stooping so low for the sake of power and it is dangerous. What is the guarantee that the BJP which is snooping on politicians, officers, journalists and activists will not spy on the private lives of the common man," asked Kumaraswamy.

"Every time we believe the BJP-led Union government cannot go any lower, fresh proof arrives to show they can and will stoop to the lowest. The Pegasus snoopgate shows that BJP will do everything, including partnering with foreign powers, to gain power and topple secular governments," said Parameshwara, adding that it was the same modus operandi used by BJP to come to power in Goa, Pondicherry, Manipur and Madhya Pradesh despite being rejected by the people.

"Brazen horse-trading and misuse of power by the BJP has led to the death of democracy in India," he added.

"During the UPA rule in 2013, 9,000 phones and 500 email accounts were put under surveillance. The Congress government was snooping on its own ministers and leaders as per the information procured under RTI by our party leaders. Amnesty International is trying to make serious allegations against our government and the party. A database hacking and data leak is being alleged as snooping. Congress leader and lawyer Kapil Sibal has informed the Supreme Court that it is not possible to leak data by hacking WhatsApp and that phone tapping can be done only under the provisions of the Telegraph Act," said Ashwath Narayan.

Further, the state information technology minister alleged it was only a "ploy" to disrupt the Parliament session and to bring disrepute to the government. "The software from Pegasus is being used across 45 countries. But there is a concerted effort to malign our country by anti-nationals and foreign agents and I strongly condemn it," said Ashwathnarayan.

The Congress party which failed to ensure social justice in its 50 years of rule is now grudging the BJP for constituting an all-inclusive Union cabinet, he alleged.

"The newly formed cabinet under Prime Minister Narendra Modi has representation from women, minorities and backward classes. So, the Congress and the Left parties created ruckus in the house to prevent the PM from introducing the new ministers," he added.

The BJP leader also alleged that Amnesty International was promoting religious conversions in the country, funding anti-national students' organisations and supporting terror activities. "When the BJP government sought its accounts, it abandoned the country," charged Ashwathnarayana.