India-China ties still at low point, which is not in anyone's interest: Wang Yi 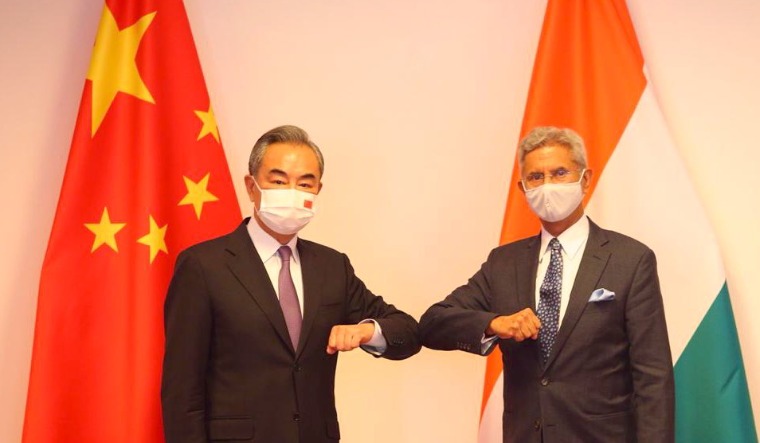 With India firmly conveying to China that the prolongation of the existing situation in eastern Ladakh was visibly impacting bilateral ties in a "negative manner", Beijing on Thursday said it is ready to seek a "mutually acceptable solution" to the issues that require "urgent treatment" through negotiation.

During their hour-long in-person meeting on the sidelines of an SCO conclave in Dushanbe on Wednesday, External Affairs Minister S. Jaishankar told his Chinese counterpart and State Councillor Wang Yi that any unilateral change in the status quo along the Line of Actual Control (LAC) was "not acceptable" to India and that the overall ties can only develop after full restoration of peace and tranquillity in eastern Ladakh.

The meeting in Tajikistan's capital took place amid a stalemate in the disengagement process between the two militaries in the remaining friction points in eastern Ladakh after they withdrew troops and weapons from the Pangong Lake areas in February following a series of military and diplomatic talks to resolve the standoff since May last year.

In a statement posted on its website on Thursday on Wang's talks with Jaishankar, the Chinese Foreign Ministry said, the minister stated that India-China relations remained at a “low point” while the situation at the border has “generally been easing” after the withdrawal of troops from the Galwan valley and Pangong Lake.

However, the relations between India and China are still at a “low point”, which is not in “anyone's interest”, Wang said.

While reiterating China’s oft-repeated stand that it was not responsible for the China-India border situation, Wang, however, said that “China is ready to seek a mutually acceptable solution to the issues that require urgent treatment through negotiation and consultation with the Indian side.”

While China moved its troops from Galwan valley and Pangong Tso, the disengagement has not been completed from other friction points like Hot Springs, Gogra and Depsang in eastern Ladakh.

In his meeting with Wang, Jaishankar firmly conveyed that the prolongation of the existing situation in eastern Ladakh was visibly impacting the bilateral ties in a "negative manner" and rued that there was no forward movement from the Chinese side since the disengagement in Pangong Lake areas in February that had created conditions for resolving the remaining issues. Jaishankar told Wang that any unilateral change in the status quo along the Line of Actual Control (LAC) was "not acceptable" to India and that the overall ties can only develop after full restoration of peace and tranquillity in eastern Ladakh, according to statement issued by MEA on Wang-Jaishankar talks.

While agreeing to discuss mutually acceptable solution to the “issues that require urgent treatment,” Wang said the two sides should place the boundary issue in an appropriate position in bilateral relations and create favourable conditions for the settlement of differences through negotiation by expanding the positive aspects of bilateral cooperation.

"It is important to consolidate the achievements of the disengagement, strictly abide by the agreement and consensus between the two sides, refrain from taking any unilateral actions in the sensitive disputed areas and avoid the recurrence of the situation due to misunderstanding and misjudgement," Wang was quoted as saying by the Chinese Foreign Ministry statement.

“We need to take a long-term view, shift from emergency management to normal border management and control mechanisms, and prevent border-related incidents from causing unnecessary disruptions to bilateral relations,” he said.

The essence of China-India relations is how two major developing neighbours view each other, how to live in harmony and how to achieve mutual success, Wang said.

The mode of interaction between China and India should continue to be dominated by cooperation, mutual benefit and complementarity, healthy competition and avoidance of confrontation, he said.

“Today, China and India shoulder more important responsibilities for peace and prosperity in their respective regions and the world at large. We should pay more attention to our common strategic interests and deliver more benefits to the peoples of the two countries,” Wang said.

Recalling their last meeting in Moscow, in September 2020, Jaishankar also emphasised the need to follow through on the agreement reached then and complete the disengagement, resolving the remaining issues along the LAC in eastern Ladakh at the earliest.

According to military officials, each side currently has around 50,000 to 60,000 troops along the LAC in the sensitive sector.