As per law, Tirath Rawat must get elected to Assembly by September 10 to remain CM 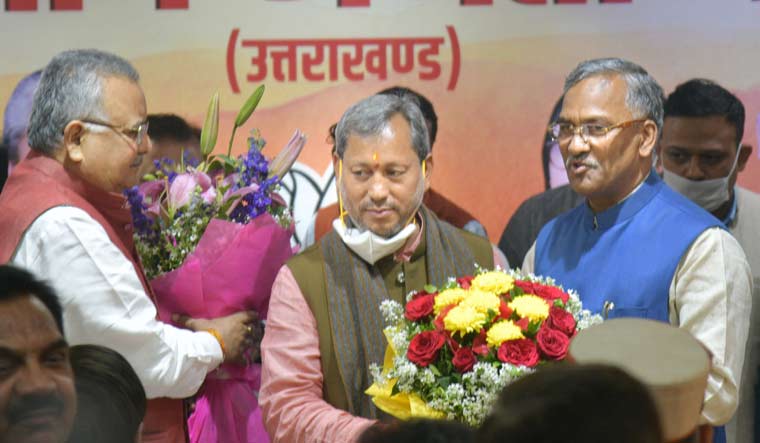 A buzz has been generated by the BJP central leadership after it called Uttarakhand Chief Minister Tirath Singh Rawat to Delhi for discussions. The issue central to the political developments is of a highly legal nature since Tirath Singh Rawat is not a member of the Uttarakhand Vidhan Sabha and is fast running out of time to get elected to the state Assembly.

The law in question is laid out in Article 164(4) of the Constitution, according to which “a minister who for any period of six consecutive months is not a member of the Legislature of the State shall at the expiration of that period cease to be a Minister.”

There are two vacancies in the Assembly—Gangotri and Haldwani.

However, according to the opposition Congress in the state, the bypoll route is closed for Tirath Singh Rawat since byelections can be held only if the member will have a tenure of at least one year. It has cited Section 151A of the Representation of the People Act, according to which the Election Commission must fill vacancies in the Houses of Parliament and in the Vidhan Sabhas through byelections within six months of a seat falling vacant. However, there is a caveat in the section, which states that a byelection can be held “provided that the remainder of the term of a member in relation to a vacancy is one year or more.”

The term of the current Vidhan Sabha gets over on March 23, 2022. Since Assembly elections in Uttarakhand are just months away and scheduled to be held in February 2022, it is contended that byelections cannot be held at this juncture.

Maharashtra Chief Minister Uddhav Thackeray had faced a similar predicament last year. But he got elected to the legislative council, thereby procuring a membership of the Maharashtra Assembly. However, unlike Maharashtra, the Uttarakhand Assembly is a unicameral house.

Meanwhile, Tirath Singh Rawat can draw confidence from a precedent from Odisha. In 1999, Congress's Giridhar Gamang, who was then a Lok Sabha MP, was appointed as chief minister of Odisha. Assembly elections were due in less than a year in 2000. However, he got elected to the Vidhan Sabha through a bypoll held in 1999.