Explained: Kashmir after Article 370 abrogation, and why Delhi is engaging 'Gupkar Gang'

Can June 24 meet end the political impasse in J&K? 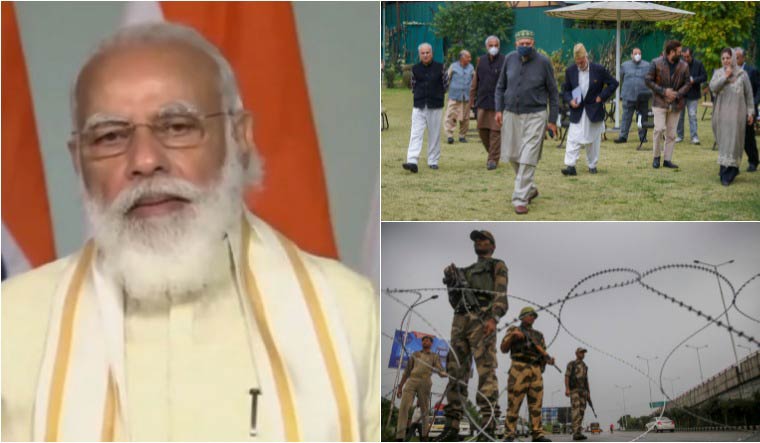 In the first week of June, troop movements in Jammu and Kashmir sparked rumours that the Centre would separate Jammu from Kashmir and grant the region statehood, while Kashmir would be divided into two Union Territories (UT). Nervous residents in Kashmir likened the situation to the events preceding the scrapping of Article 370, when thousands of Central Armed Police Force personnel (CAPF) moved into Kashmir for a lockdown.

Pakistan also reacted to the rumours. “We have noted with serious concern reports indicating that India might be plotting further division, bifurcation & (and) demographic changes in #IIOJK (Indian Illegally Occupied Jammu and Kashmir) to perpetuate its illegal occupation. No new instrument of occupation shall have any legal effect," Zahid Hafeez Chaudhry, the spokesperson of Pakistan's ministry of foreign affairs, posted on Twitter.

Tensions eased when these rumours were refuted by J&K Lieutenant Governor Manoj Sinha in an interview on June 11. A week later, reports emerged that the Centre was reaching out to J&K leaders to revive the political process in the UT. On June 20, Union Home Secretary Ajay Kumar Bhalla invited 14 J&K politicians to a meeting on Jammu and Kashmir with Prime Minister Narendra Modi, which will take place in New Delhi on June 24.

The move is the first major initiative by the Centre to address the political impasse in the Union Territory after the abrogation of Article 370 on August 5, 2019. Observers believe the move is intended at holding the assembly elections before winter and restoring the statehood to Jammu and Kashmir.

Though the Centre succeeded in keeping things quiet in Jammu and Kashmir by imposing a lockdown and a communication blockade that lasted for weeks after the Article 370 move, it has struggled to address the political void created by the withdrawal of limited autonomy.

The regional parties—the NC, the PDP and smaller parties—have refused to accept the stripping of J&K's autonomy and statehood, and have also challenged the decisions in the Supreme Court. The BJP tried to counter the regional parties by backing new political forces like the J&K Apni party (J&KAP) that was formed by former minister and PDP leader Altaf Bukhari after the reading down of Article 370. Bukhari succeeded in roping in several political leaders from other parties but failed to win the support of the masses. 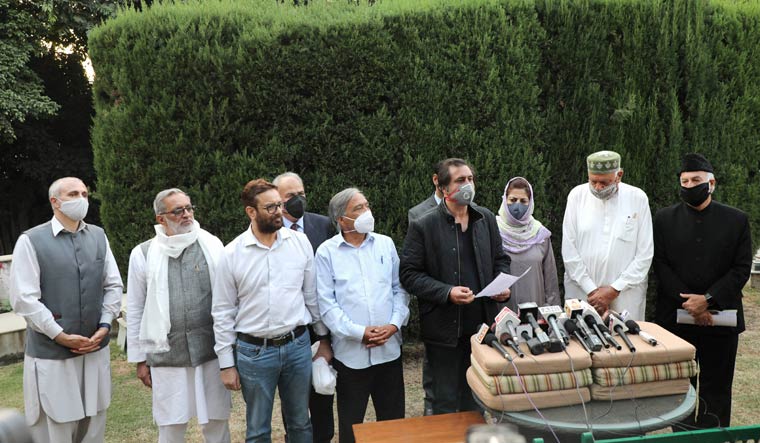 File: Members of People's Alliance for Gupkar Declaration addressing a press conference after their meeting at Bathindi in Jammu | PTI

The People's Alliance for Gupkar Declaration (PAGD), a five-party alliance led by Farooq Abdullah that seeks restoration of Article 370 and statehood to Jammu and Kashmir, has accused the J&KAP of being the BJP's proxy. Last year in December, the Centre also held the first-ever District Development Council (DDC) elections in Jammu and Kashmir, intending to create a new leadership at the grassroots. The BJP had guessed that the PAGD, which it called the "Gupkar Gang, would stay away from the polls in protest against the scrapping of J&K's special status.

The PAGD not only contested the polls but also won half, 110 of the 220 DDC seats. While the BJP emerged as the single largest party with 75 seats (all in Jammu except for three seats in Kashmir), it failed to keep the PAGD at bay.

After the polls, the Centre set up a delimitation commission for assembly constituencies in the UT. Justice (retired) Ranjana Desai was appointed as the chairperson of the commission with five J&K MPs—three from the NC and two from the BJP—as associate members. The Jammu and Kashmir Assembly in 2002 had deferred delimitation till 2026 by amending the People’s Representation Act. However, after the J&K Reorganisation Act, 2019 was passed, the BJP set in motion the fresh delimitation of the 90 assembly constituencies in the UT.

The process has made little headway as the NC has challenged the validity of the J&K Reorganisation Act 2019 in the Supreme Court. In February, the union minister for Law and Justice extended Deasi's term by six months to get the job done.

Of late, the NC has softened its stand against the formation of the delimitation commission and authorised Abdullah, who is the party president, to take a final call on the matter. Party sources said after the commission responds to their letter in which they have demanded altering the modalities, they will cooperate with the commission.

After delimitation, the number of assembly seats in Jammu and Kashmir went up from 107 to 114. Elections will be held for only 90 seats, as 24 seats are for assemblies within Pakistan occupied Kashmir (PoK). With the creation of Ladakh as a Union Territory, the J&K assembly was left with 83 seats. After delimitation, the number of assembly seats will be 90. Two women MLAs will be nominated, as was done earlier also.

Jammu is likely to get the maximum number of seats after delimitation. That will narrow the gap in the number of assembly seats between Jammu (37 at present) and Kashmir (46) and create a possibility for the first-ever chief minister from Jammu. A Hindu chief minister in Jammu and Kashmir is one of the long-pending goals of the BJP, along with shifting the balance of power from Kashmir to Jammu.

The J&K meeting is taking place after the BJP met most of its goals in the UT following the abrogation of Article 370. The party removed legal barriers for outsiders to settle in Kashmir, and changed laws to allow industrialists to set up businesses in the UT, potentially attracting more outsiders to the UT.

According to informed sources, the decision to invite J&K leaders was taken after contacting some of the J&K politicians behind the scenes. 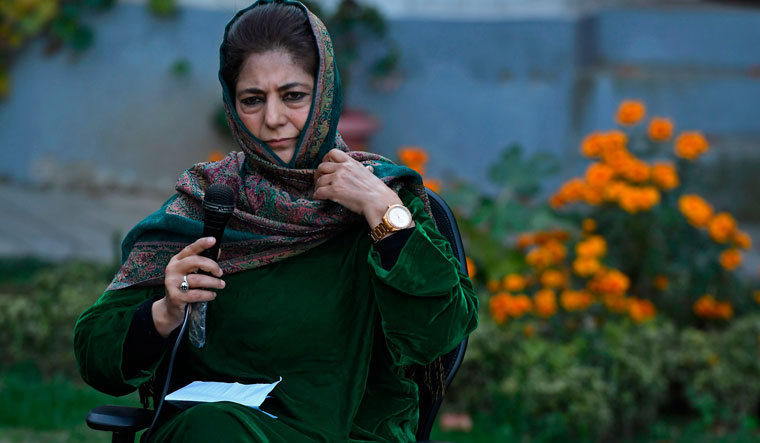 The Centre was particularly concerned about PDP president Mehbooba Mufti, who was the most vocal critic of the actions taken by the BJP in J&K. She was the first to be contacted by the Home Ministry. Sources said she demanded the release of all political prisoners that were detained during the lockdown in 2019. The former PDP president is also upset at the Enforcement Directorate for registering a case against her for money laundering. Her bank accounts have been frozen while both her passport and that of her mother have been blocked due to an "adverse" verification report by the J&K Police. However, after demanding the release of all political prisoners, two senior PDP leaders Nayeem Akhtar and Sartaj Madni, Mufti's uncle, were released from detention. Detained PDP youth president Waheed Parra, who won the DDC polls last year, was also shifted from Jammu to Srinagar. Parra has been accused by the J&K Police of funding separatists and having links with militants and Pakistan. On June 20, the PDP’s Political Affairs Committee (PAC) authorised Mufti to decide whether to attend the meeting on J&K.

PDP Chief spokesman Suhail Bukhari told reporters that the members held a virtual meeting and authorised the party president to decide whether to accept the invite to attend the conference. He said, “People's Alliance for Gupkar Declaration (PAGD) has also called a meeting in which the participation in the all-party meeting will be decided,” he said. Sources in the NC said Abdullah, who is also facing an ED probe over the alleged misappropriation of funds in the J&K Cricket Association (JKCA) during his stint as the president of the JKCA, is likely to attend the meet, and raise the demand for the restoration of Article 370 and statehood to J&K.

'No going back' on demand for restoring 370

M.Y. Tarigami, PAGD spokesman, told THE WEEK that they are meeting on June 22 to deliberate on the invitation to the meeting with Prime Minister Narendra Modi.

“We are meeting at Farooq Abdullah’s residence to discuss the response to the invitation,’’ he said.

Muzaffar Shah of Awami National Conference, which is part of PAGD, said if the PAGD decides to attend the meeting they will demand the restoration of position to Jammu and Kashmir that existed before August 5, 2019.

The decision to hold a meeting on Jammu and Kashmir is being seen as an acknowledgement by mainstream leaders in Kashmir that the Centre has exhausted all its hard options and is now looking to the mainstream to restart the political process.

There are other factors that observers believe are responsible for the Centre extending an olive branch to the J&K leaders. One of them is the US withdrawal from Afghanistan, which underscores Pakistan's role in the region even as Islamabad constantly demands the restoration of statehood and guarantees against changing the demography of Jammu and Kashmir as a precursor to normalising relations with India.

The other factor is the change of guard in the US. The Democrats are likely to nudge India more to restore normalcy in the UT. There are also chances of Modi visiting the US later this year. A decision to hold assembly elections and announce a timeline for restoring statehood to J&K would be positively viewed by the US. Such measures would help Modi to project commitment to democracy and the rights of all citizens in India. Another factor is the Chinese aggression in Ladakh precipitated by the actions taken by the BJP in 2019 on Jammu and Kashmir and Ladakh.

The Centre has already accepted the demands of the UT's Buddhists in the cold region to reserve all government jobs for locals. Measures against demographic change in the region are also being worked out by the Centre for the UT. Similar, pro-people initiatives in J&K will help alleviate the growing sense of disempowerment. Lastly, with China emerging as a bigger security challenge post-Ladakh aggression than Pakistan, New Delhi is trying to make peace with Pakistan. And to make that durable, some concessions in Kashmir are necessary.