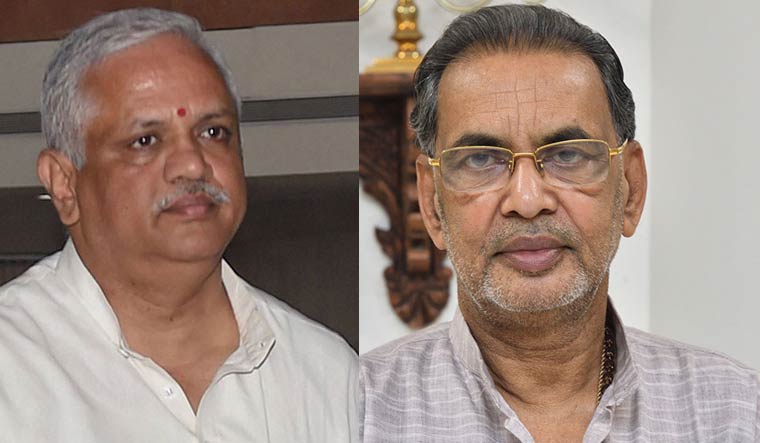 The BJP's national general secretary (organisation) B.L. Santhosh and Uttar Pradesh in-charge Radha Mohan Singh will be in Lucknow on Monday to review its programmes, their second visit this month as the party sets in motion preparations for the crucial assembly polls next year.

During their earlier visit from May 31 to June 2, Singh had shot down speculation of a leadership change in the state and had defended the Yogi Adityanath government's handling of the COVID-19 situation.

In a statement, the UP BJP said that Santhosh and Radha Mohan Singh will be in Lucknow on June 21 and June 22.

"National general secretary (organisation) B.L. Santhosh will hold meetings with party office bearers and review the post-COVID centres, vaccination awareness campaign and other ''sevaa'' works. He will also give his guidance for upcoming party campaigns and programmes," the statement said.

A party leader said that a few days before Deepavali (in November), the party will come into "full election mode" for the 2022 UP assembly elections.

While a few BJP lawmakers have expressed resentment openly on the handling of the second COVID wave, the major opposition parties, the SP, the BSP and the Congress, are planning to make it a major issue in the state Assembly polls, which are only months away.

The visit by Santhosh to Lucknow comes after the Uttar Pradesh unit of BJP appointed its state MLC A.K. Sharma, a former IAS officer, the party's state vice president.

Sharma, considered a trusted aide of Prime Minister Narendra Modi, was handed over the new assignment amid speculation that he would be inducted into the Yogi Adityanath government in a senior ministerial position ahead of the next year's assembly elections.

However, Sharma's appointment as the vice president of the BJP''s state unit negates the chances of his induction in the state Cabinet because of the BJP's larger principle of one-man-one-post, a party leader said.

Archana Mishra from Lucknow and Amit Valmiki from Bulandshahr were appointed as secretaries of the state unit.

The BJP, on Saturday, also announced the appointment of Pranshudatt Dwivedi from Farrukhabad as the chief of BJP Yuva Morcha, Geeta Shakya of Auraiya as party's Mahila Morcha chief, Kameshwar Singh of Gorakhpur as Kisan Morcha chief.

On Sunday, the UP BJP also declared its IT team and media team.

During his previous visit to Lucknow, both the deputy chief ministers Keshav Prasad Maurya and Dinesh Sharma, and the UP's Law minister Brijesh Pathak had met Santhosh.

On June 1, Santhosh had praised the UP government's handling of COVID-19. In a tweet, he had said, "In five weeks, @myogiadityanath's Uttar Pradesh reduced the new daily case count by 93% ... Remember it's a state with 20+ Cr population. When municipality CMs could not manage a city of 1.5Cr population, Yogiji managed quite effectively."