State Congress in-charge clears the air on developments in Rajasthan 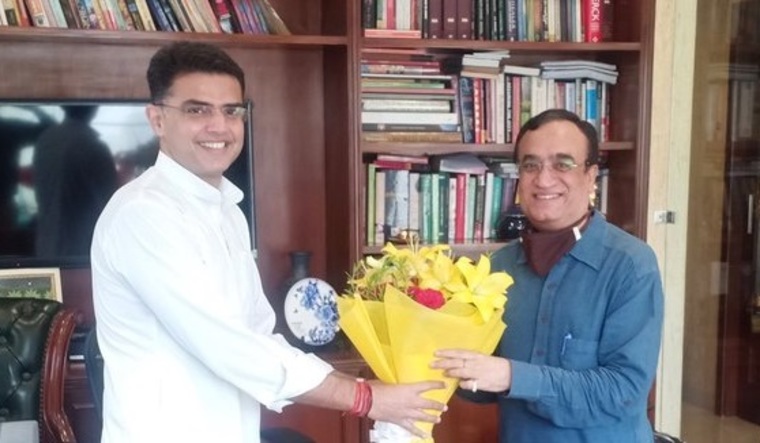 Amid the ongoing tussle for power in Rajasthan Congress, Ajay Maken, in-charge of party affairs in the state, on Friday described former deputy chief minister Sachin Pilot as a big asset for the party and rubbished talks about him failing to get an appointment with AICC General Secretary Priyanka Gandhi Vadra.

In the backdrop of talks about Pilot failing to meet Vadra during his recent visit to Delhi, Maken, who is AICC General Secretary in-charge of party affairs in Rajasthan, said it was not possible that Pilot sought time with any leader and did not get it. “Priyankaji has not been in Delhi for the last 10 days. It is not a secret. Also, Priyankaji has been talking to Sachin Pilotji. K.C. Venugopalji and I have also been talking to Sachin Pilotji,” said Maken, going on to describe him as a big asset for the party and a star campaigner.

Asked about the demand of the Pilot camp for an expansion of the state cabinet and political appointments, Maken said discussions are on with Chief Minister Ashok Gehlot, state Congress president Govind Singh Dotasara, Vidhan Sabha Speaker C.P. Joshi, Pilot and cabinet ministers.

He said the interests of all groups and sections of the society will be kept in mind while executing changes in the cabinet and carrying out political appointments.

As attacks and counter-attacks between the Gehlot and Pilot camps have placed the differences within the Rajasthan Congress out in the open, the AICC General Secretary advised MLAs against making public comments.

Reacting to the BJP's taunts about the infighting in Rajasthan Congress, Maken said the BJP would do well to manage its own affairs and put its own house in order.

Maken's statement gains significance in the backdrop of Pilot and his loyalists making their restlessness evident with regard to promises made to them by the party high command about their issues being resolved when a truce was called between Pilot and Gehlot last year.

Among the expectations of the Pilot camp are adequate representation in the Gehlot cabinet and appointments in boards and corporations, besides being prominently placed in the organisation. Pilot and MLAs owing allegiance to him have now made their discontentment known about their demands not having been met and have made it clear that they are running out of patience.

In this scenario, Pilot's recent visit to Delhi, where he camped in the capital for a few days, generated a lot of interest and there was an intense speculation that he would have a meeting with Vadra to air his grievances. When he returned to Jaipur without the meeting taking place, there was talk about the former deputy chief minister failing to get an appointment with Vadra. Maken's statement sought to clear the air with regard to the conjecture.