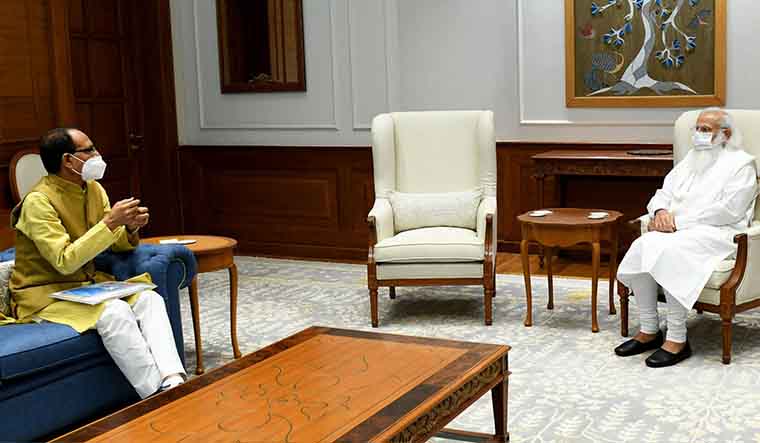 Madhya Pradesh Chief Minister Shivraj Singh Chouhan met Prime Minister Narendra Modi in New Delhi on Wednesday. Though the meeting was said to be over state-related issues, political connotations are being seen by political observers as well as opposition Congress, especially in the context of the speculations over Union cabinet reshuffle or expansion.

Since the PM has been meeting BJP chief ministers during the past few days amid speculations of cabinet expansion, and since names of Madhya Pradesh leaders like Jyotiraditya Scindia feature among the contenders, the meeting of Chouhan with PM Modi was looked upon with political interest.

There have also been speculations regarding change of guard in MP on the lines of Uttarakhand, especially after senior BJP leaders from state had closed-door meetings earlier this month. But the leaders have dismissed such talks as rumours.

Yet, the Congress has been hinting at a possibility of change in the guard and, on Wednesday too, after Chouhan’s meeting with the PM, took a dig at Chouhan saying that the PM maintained ‘a distance’ from the CM during the meeting. The MP Congress posted four photographs on its official Twitter handle, of recent one-on-one meetings of PM Modi with UP CM Yogi Adityanath, Uttarakhand CM Tirath Singh Rawat and new CM of Assam Himanta Biswa Sarma, apart from the one with Chouhan.

The tweet pointed out that while the other three CM were given a seat close to the PM, Chouhan was made to sit at a distance. “Governments have changed, governments will be changing,” the tweet said.

The official version, however, said the meeting was to discuss the state issues with the PM. During the discussion, Chouhan sought an increase in borrowing limit for states to 5.5 per cent of respective gross domestic product (GDP), given the economic constraints being faced by the states due to COVID-19 induced lockdown.

In a statement after meeting the PM, Chouhan said that the economic situation of the states has wobbled and COVID-19 curfews have led to great revenue loss. “Last year, the states had a borrowing limit of 5.5 per cent of GDP that has been reduced to 4.5 per cent this year. I have urged the prime minister to ensure that the infrastructure development works do not stop, and states should be allowed a borrowing limit of 5.5 per cent of GDP again. I have been assured that the Centre will consider this seriously,” Chouhan said.

The CM also said that he apprised the PM about the unique work done by the COVID-19 crisis management committees in the state during the second wave of the pandemic. He said that, on Tuesday, the state reported only 107 positive cases with positivity rate of 0.2 per cent and that the infection was now in total control in MP.

Chouhan also said that the state government was in full preparation to control if and when the third wave strikes. He expressed gratitude to the PM for the fact that the Centre had taken over the vaccination programme totally and mentioned that Madhya Pradesh will launch a massive vaccination drive from June 21 that will include mass awareness programme with his involvement, and that of people’s representatives at different levels, crisis management committees and prominent persons of the state.

Also, the issues of distribution of free ration to be given by the Centre, subsidy on DAP and moong crop procurement were discussed, the CM said.