"The government was saved last year only because we stood by it," says the MLAs 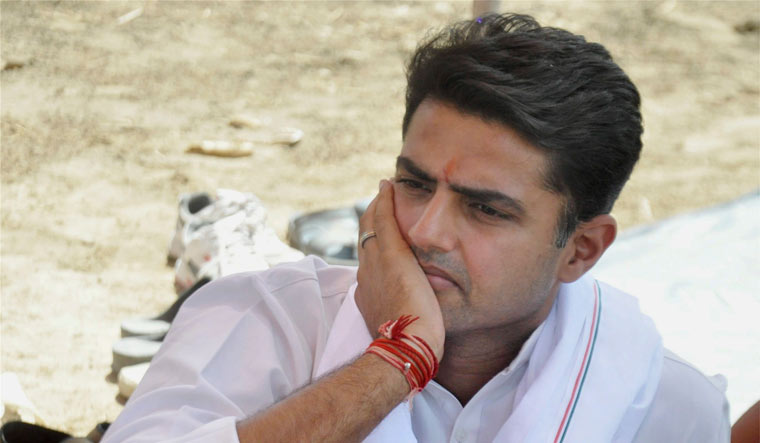 Amid a political turmoil in the Rajasthan Congress, its MLAs who had defected from the BSP and those in the Sachin Pilot camp were on Tuesday bickering over who was "loyal" to the party and should be "rewarded" in a likely cabinet expansion.

Tijara MLA Sandeep Kumar Yadav and three other MLAs, who were elected on a BSP ticket, objected to any move by the Congress high command to pacify dissident legislators led by Sachin Pilot, saying it was because of them that the government was in crisis last year.

"The government was saved only because we six and other independents stood by it, said Yadav who was among the six BSP MLAs who had merged their legislative party with the Congress.

"The Congress high command should not listen to them. Those who saved the government should get reward and honour," he said.

Hitting back, party legislator Mukesh Bhakar said those who switch parties frequently were talking about loyalty and added that people of the state know who is trustworthy and who is not.

"People of the state know who is trustworthy and who has betrayed. Those people who have switched three parties in two-and-a-half years because of their greed for power are telling us about loyalty and honesty.

"This is wrong. They should tell on whose directions they are giving such statements," Bhakar, a Pilot loyalist, told reporters at a press conference.

He was accompanied by Congress MLA from Masuda constituency Rakesh Pareek.

MLA Sandeep Kumar Yadav, who was earlier in the BJP but was denied ticket to contest assembly election in 2018 and had moved to the BSP,  said instead of listening to the rebel MLAs, the Congress high command should take the right decision and do justice to those who have shown loyalty.

MLAs Jogendra Awana, Rajendra Gudha and Lakhan Singh also said that the Ashok Gehlot government was about to fall because of Pilot and the MLAs loyal to him.

The remarks come amid growing restlessness in the Pilot camp over the "delay" in meeting the demands made by the faction last year and the talk of a possible cabinet expansion to accommodate it.

Bhakar said that only time would tell which legislator was supporting which leader.

"Those who are with us are on the road after leaving their ministerial posts. If we wanted to remain in power, then we too would have indulged in flattery," he said.

The Congress legislator said that it is a fight for the party's survival and not for securing a ministerial post.

He said that "be it Sardarshahr MLA Bhanwar Lal Sharma or anyone else, nobody can deny people's love for Congress, Sachin Pilot and his mandate".

Sharma, who was with dissident leader Pilot during his rebellion against Rajasthan Chief Minister Ashok Gehlot last year, on Tuesday expressed faith in the CM's leadership.

He also said that Pilot would not move to the BJP and the issue of resentment in the Congress was being "exaggerated".

"I consider Sachin Pilot as my leader. Ashok Gehlot is above him. He is the chief minister so he will have to be considered as the leader, even Sachin will also have to consider him as the leader, he told reporters at his residence in Jaipur when asked whether he considers Pilot as his leader.

Sharma is the third Pilot loyalist MLA after Virat Nagar MLA Indraj Gurjar and Todabhim MLA P R Meena to praise Gehlot for the work done in their constituencies in recent days.

On a possible cabinet expansion in the state, the senior MLA said nine cabinet berths are vacant and 25 legislators are eyeing the posts.

He said it was for the chief minister to take a decision on who should be included in the cabinet, whether they are the MLAs who came from the BSP, independents or those who are with Pilot.