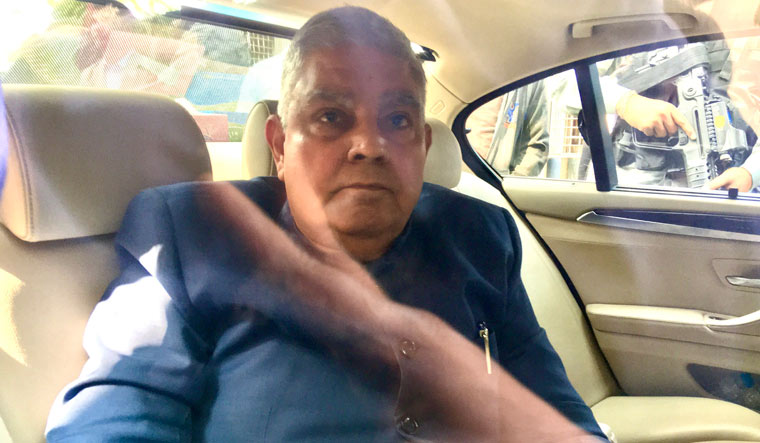 West Bengal Governor Jagdeep Dhankhar is going to Delhi on a three-day visit which has created a lot of speculation in the state. He will separately meet Home Minister Amit Shah and Prime Minister Narendra Modi. Raj Bhavan sources said the governor may also meet President Ram Nath Kovind.

The governor will apparently discuss the issue of law and order situation in the state with both Modi and Shah. However, his visit to Delhi assumes significance as it comes a day after a 50-member team of BJP MLAs, led by leader of opposition Suvendu Adhikari, marched to Raj Bhavan from the assembly on foot and submitted a memorandum to Dhankhar.

On Monday morning, Adhikari had said that a big group of BJP MLAs would be meeting the governor. However, during the deputation in Raj Bhavan, around 25 legislators were not present, which raised a lot of speculation.

The ruling Trinamool Congress has officially said that a large number of BJP MLAs are in touch with TMC national general secretary Abhishek Banerjee. The TMC sources also indicated that an MP from North Bengal, who is close to Mukul Roy, is also in touch with the party. Roy has been entrusted with the job to break the BJP, said confidential sources. The former BJP national vice president, who recently defected to TMC, is out of action for the time being as his wife is battling for life due to COVID-19 complications at private hospital in Kolkata.

The absentees of Monday's meeting included several MLAs from Bongaon and Barrackpore subdivisions. Even as the MLAs from North Bengal were present, many of the lawmakers who are just 50 km away from Kolkata were conspicuous by their absence.

Meanwhile, Manoj Tigga, a BJP MLA from Madarihat, rushed to the house of TMC leader and cabinet minister Partha Chatterjee following the death of the minister's mother. He spent half an hour at Chatterjee's house. “These are common practice to visit a colleague in assembly when someone from his or her family dies. Nothing more to it,” Tigga said.

Gaighata MLA Biswajit Das and Noapara MLA Sunil Singh have openly said that they were friends of Roy. “It is well known that I am close to Mukul da. I even know didi (Mamata Banerjee) well,” said Das.

Singh said: “Mukul da leaving us is a very serious issue. He is definitely a friend of mine.” Singh had recently discarded his central government security.

Amid such a political situation in the state, the governor’s visit to Delhi would mean a lot. His visit also comes at a time when the Supreme Court took up the two rape cases and two murder cases—which are part of the part of post-poll violence—for hearing.