It's advantage Nitish, NDA in Bihar after revolt in LJP 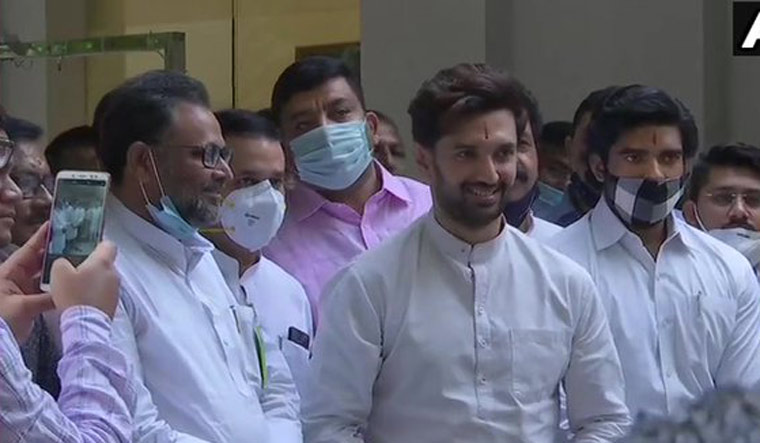 Chirag decided to contest alone in Bihar Assembly elections, but the LJP failed to make a significant dent in the state politics.

The uncle has ousted his nephew. Eight months after Union minister Ram Vilas Paswan's death, his Lok Janshakti Party is facing an existential crisis in Bihar. Five of the six LJP MPs have asked Lok Sabha Speaker Om Birla to recognise Pashupati Nath Paras as the party's floor leader in the house in place of Paswan's son Chirag Paswan.

Chirag was elected as LJP chief in 2019 when Ram Vilas Paswan was alive, thus making him inheritor of his father's legacy. Since Paswan's death in October 2020, Chirag decided to chart out an independent path as he chose to contest alone in Bihar Assembly elections, making Chief Minister Nitish Kumar his primary target. The 38-year-old was relentless in his attack on Nitish Kumar, while pledging support for the BJP. While Nitish Kumar returned as the CM with diminished numbers, the LJP failed to make a significant dent in the state politics.

Since then, Chirag has been maintaining a low profile, till his father's brother Pashupati Nath Paras and his cousin Prince Raj revolted against his leadership, accusing him of arbitrary and autocratic functioning. The relations between the family members were tense as Chirag's move to emerge as a king maker in Bihar had backfired.

The action was swift as Paras was elected as the leader of the parliamentary party with the support of other MPs including Veena Devi, Mehbub Ali Kaiser and Chandan Singh. Chirag has offered to make his mother Reena Paswan as party chief as a peace deal to his uncle and cousin to keep the party intact. However, as the coup unfolded, it may be too late for the rapprochement.

Paras was a minister in the Nitish Kumar cabinet before being elected as a Lok Sabha MP from Hajipur, a seat won many times by his elder bother Ram Vilas Paswan.

As the political drama unfolded in Bihar, it's advantage Nitish Kumar, and NDA. Since the last assembly elections, Nitish Kumar has been consolidating his position. The JD(U) earlier witnessed the return of RLSP chief Upendra Kushwaha to the party fold. Kushwaha had floated his own party and contested against Nitish. As he failed to make his mark in the state elections, he returned to the JD(U) and was made party's parliamentary board chief and even an MLC.

Now, Paras' revolt is also seen in the same light. Paras praised Nitish Kumar as a development man, and said he will continue to be part of the NDA. While the JD(U) leaders did not deny that Paras and his fellow LJP members could join Nitish's party, the political circles were abuzz that lure of cabinet post could have meant Paras switch sides.

The JD(U)'s arch-rival, RJD, has accused Nitish Kumar of engineering revolt in Ram Vilas Paswan's party. Earlier, LJP's lone MLA in the state assembly, too, had switched sides to JD(U).

Paras' revolt has come at a time when Prime Minister Narendra Modi is expected to expand his cabinet. There have been indications that leaders from ally parties will be drafted in the cabinet to strengthen the NDA. If he makes an entry to cabinet, it will be an addition of another dalit leader, a gesture which will be noticed.

Paras said he remains with the NDA and continues with the LJP. However, it is yet to be seen if Paras will maintain his identity by remaining part of the LJP, a party his brother founded, or merge with the JD(U). In any case, Chirag has been isolated politically, for now. He will certainly need deft handling to remain politically viable. Lok Sabha elections are still three years away.