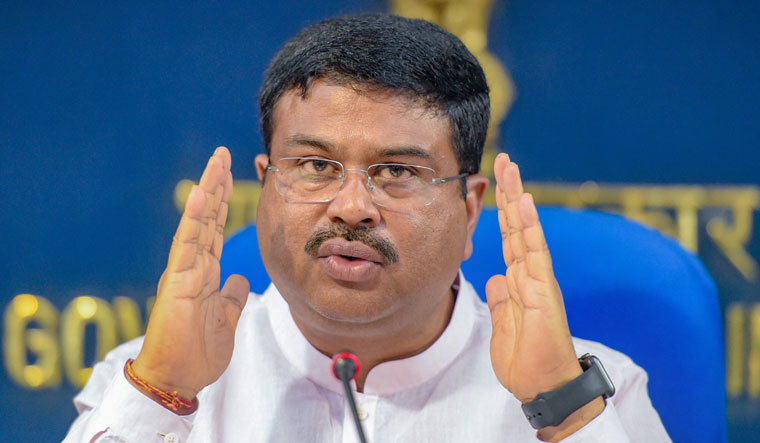 With petrol and diesel prices climbing to record high, Oil Minister Dharmendra Pradhan, on Sunday, asked Congress governments in Rajasthan and Maharashtra to cut sales tax if the party was concerned about fuel price burden on common man, but did not say if BJP-ruled states like Madhya Pradesh and Karnataka, where petrol has crossed Rs 100 mark, would do the same.

Petrol and diesel have risen to all-time high across the country after fuel rates rose by Rs 5.72 to Rs 6.25 per litre in less than six weeks. This is due to a combination of rising international oil prices and record high central and state taxes.

Talking to reporters on the sidelines of an event organised to inaugurate oxygen plant set up by Indraprastha Gas Ltd at Maharaja Agrasen Hospital, he said central and state governments need additional money from the taxes on petrol and diesel to meet expenses for fighting pandemic as well as development work.

"I accept that fuel prices are pinching consumers," he said, adding the government is spending Rs 1 lakh crore on providing free food grains to poor this year alone besides spending money on vaccines and healthcare infrastructure.

Asked about Congress leader Rahul Gandhi's repeated attacks on the Modi government for skyrocketing fuel prices, Pradhan said, "Why is fuel expensive in Maharashtra, Rajasthan and Punjab (which are ruled by the party)?"

"If Rahul Gandhi is concerned about the poor being hit by fuel prices, he should ask chief ministers of Congress-ruled states to cut taxes. He should ask (Maharashtra Chief Minister) Uddhav Thackeray to reduce taxes," he said.

He, however, did not say if BJP-ruled states like Madhya Pradesh and Karnataka, which too have seen petrol price cross Rs 100 a litre mark due to local taxes, would follow suit.

Fuel prices differ from state to state depending on the incidence of local taxes such as VAT and freight charges. And because of this, petrol retails at over Rs 100 per litre mark in seven states and union territories—Rajasthan, Madhya Pradesh, Maharashtra, Andhra Pradesh, Telangana, Karnataka and Ladakh.

Of these states, Congress is in power in Rajasthan and is a coalition partner with Shiv Sena and NCP in Maharashtra. BJP rules Madhya Pradesh and Karnataka and Ladakh too is under central rule. Andhra Pradesh has YSR-Congress in power while TRS rules in Telangana.

While international oil prices have crossed USD 72 per barrel in anticipation of demand recovery following the rollout of vaccination programme by various countries.

Last year when rates collapsed to two-decade low, the union government instead of passing on the benefit to consumers raised excise duty to record high. The excise tax on petrol was Rs 9.48 per litre when the Modi government took office in 2014, and that on diesel was Rs 3.56 a litre.

Sri Ganganagar district of Rajasthan near the India-Pakistan border was the first place in the country to see petrol hit Rs 100 a litre mark in mid-February and on Saturday it also earned the distinction of diesel crossing that psychological mark.

Mumbai on May 29 became the first metro in the country where petrol was being sold at over Rs 100 a litre. Petrol now costs Rs 102.30 a litre in the city and diesel comes for Rs 94.39.

Petrol and diesel prices have been raised on 23 occasions since May 4, when state-owned oil firms ended an 18-day hiatus in rate revision they observed during assembly elections in states like West Bengal.