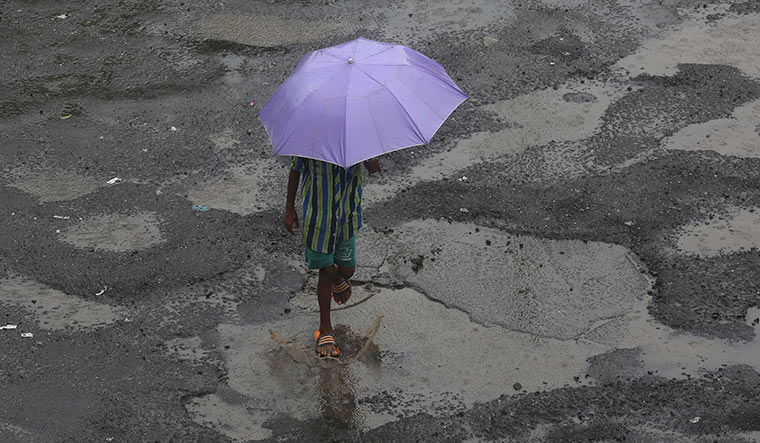 Heavy rains lashed Mumbai in 24 hours till Saturday morning, although no major water logging was reported and local trains as well as city buses largely ran as per their normal schedule, officials said. Mumbai had got some respite from rains on Friday morning after a downpour on two previous days brought the city to a halt. However, after a brief break, the city continued to get heavy rains throughout the day. A Brihanmumbai Municipal Corporation (BMC) official said that the island city recorded an average rainfall of 79.66 mm, while the western and eastern suburbs received 92.68 mm and 89.30 mm rainfall, respectively, in the last 24-hours ending 8 am on Saturday.

The IMD has issued an orange alert for Mumbai for Saturday and a red alert for Sunday. Mumbai and Thane districts would "very likely receive heavy to very heavy rainfall at a few places (on Saturday)," it has earlier said. After the IMD’s forecast, the BMC also issued a "high alert" to all the agencies considering "very heavy rainfall" in the next two days. All civic control rooms as well as those operated by other agencies have been issued the "high alert" directive, including power utility firms like BEST and Adani, while the Coast Guard, the Navy and NDRF have been asked to remain on standby to render help if required, another official said. Despite the rains on Friday, the BEST buses and suburban local services of Central Railway and Western Railway are running as per their normal schedule, and no major untoward incident was reported, the BMC official said.

On Saturday morning, rains took a break in most parts of the city and suburbs. No major water logging was reported in the low-lying areas. The flow of traffic on the city roads is smooth, he added.

According to the BMC, a high tide of 4.34 metres is expected at 1.32 pm and a low tide of 1.89 metres at 7.27 pm on Saturday. The south-west monsoon had arrived in the city with a bang on Wednesday as heavy rains caused flooding on roads and rail tracks, disrupting suburban train services. The first rains of this year's monsoon season in Mumbai had also caused water-logging in various parts of the city on that day.