She does not have the courage to speak to me, he said 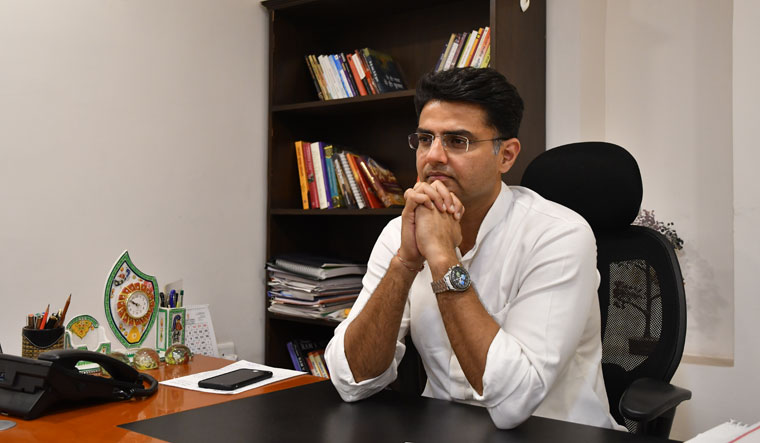 Former Rajasthan deputy chief minister Sachin Pilot on Friday refuted claims made by BJP leader Rita Bahuguna Joshi that she had spoken to him about joining the saffron camp.

"Rita Bahuguna Joshi claimed that she had spoken to Sachin. She might have spoken to Sachin Tendulkar. She does not have the courage to speak to me," Pilot told reporters during a protest organised by the Congress in Jaipur against fuel price hike.

Joshi told a TV channel that she had spoken to Pilot about joining the BJP.

Pilot's statement came amid reports of his discontentment with the Congress leadership.

The Congress leader had openly revolted against the leadership of Chief Minister Ashok Gehlot in July last year, and after a month-long political crisis, the party high command assured him of resolving the issues raised by him and formed a committee.

The Pilot camp, however, says that the issues are unresolved and nothing was done by the committee.

In the protest outside a petrol pump in the Sanganer area, Pilot targeted the central government over inflation and hike in fuel prices.

"Economic slowdown, inflation and unemployment have hit the country hard during the coronavirus pandemic. People have lost jobs and labourers are not getting wages," he said.

"It is very sad that lakhs of people died, dead bodies were thrown in rivers and every family struggled with the coronavirus, and in such a situation, the government is not taking any step to control inflation and instead, increasing fuel prices," Pilot added.

He said the prime minister had to roll back his decision on vaccination and announce free inoculation for all under pressure from the Congress.

The Congress and other opposition parties will be successful in mounting pressure on the Centre over inflation and fuel price hikes, Pilot said.

Local leaders of the party were there with him in Dausa. Gehlot and PCC chief Govind Singh Dotasra paid tributes to Rajesh Pilot on Twitter.

Iqbal said it was a person-specific bill and the name of Jadhav was mentioned in the Statement of Objects and Reasons of the bill.

He said when the country’s law allowed high courts to review the sentences awarded by military courts then what was the need for bringing the law.

Pakistan Peoples Party (PPP) Chairman Bilawal Bhutto-Zardari asked the Speaker to provide some time to the members to see the bills.

He criticised the government for first bringing the bill to provide relief to Jadhav through an ordinance and then getting it passed through bulldozing the legislation.

The bill was introduced last year and approved by the National Assembly’s Standing Committee on Law and Justice on October 21 despite protests by the Opposition members of the committee.

Technically, the passage of the bill does not make any difference as the government has already promulgated a special ordinance in May 2020 to implement the verdict of the ICJ.

The government has also filed a review in the Islamabad High Court which repeatedly asked the Indian government to appoint a lawyer to represent Jadhav to conclude the review case.

The passage of the bill in the National Assembly is just one step towards the finalisation of the law.

In case of failure to create consensus between the two houses, a joint sitting will be held to pass the bill with a simple majority.