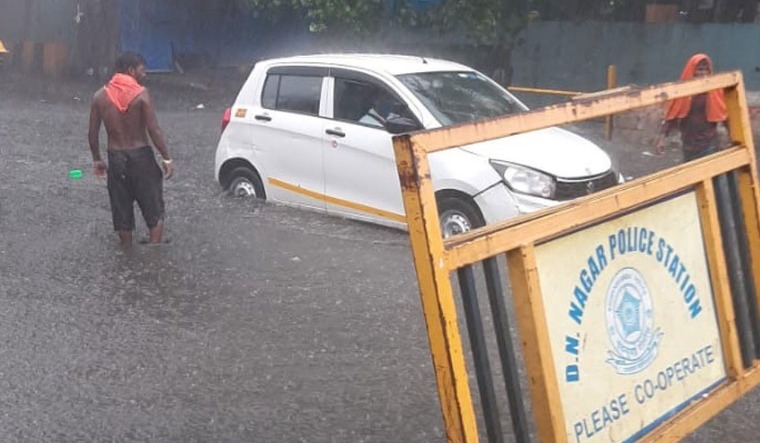 The south-west monsoon arrived in Mumbai and its neighbouring areas on Wednesday, the IMD announced as heavy rains lashed the country's financial capital and suburbs since early morning.

Local train services from Mumbai's Chhatrapati Shivaji MaharajTerminus (CSMT) to neighbouring Thane and Vashi in Navi Mumbai were suspended due to water-logging on some railway tracks, officials said. Routes of some BEST buses run the city civic body's transport wing were also diverted, they said.

A high tide of over four metres is expected around noon in the Arabian Sea, the Brihanmumbai Municipal Corporation (BMC) said. "It is monsoon arrival in Mumbai today," said Dr Jayanta Sarkar, head of the India Meteorological Department's (IMD) Mumbai office.

As per the BMC, the island city, eastern suburbs and western suburbs recorded 48.49 mm, 66.99 mm and 48.99 mm rain, respectively, in the 24-hour period ending at 8 am on Wednesday. The IMD has predicted a cloudy sky with moderate rain/ thundershowers in the city and suburbs. There is also a possibility of heavy to very heavy rainfall at isolated places.

There was water-logging between Sion and Chunabhatti stations on the Central Railway (CR) route. The local train services were initially suspended on the CR's main line between CSMT and Kurla from 9.50am.

There was no disruption on the Western Railway route and its local train services were running normal, WR's chief spokesperson Sumit Thakur said. Water pumps were being operated to clear inundation, he said, adding that drains and culverts were flowing smoothly.

The IMD on Saturday confirmed the arrival of the southwest monsoon in Maharashtra as it reached Harnai in coastal Ratnagiri district. But, despite favourable conditions, the monsoon's further progress seemed to be slow.