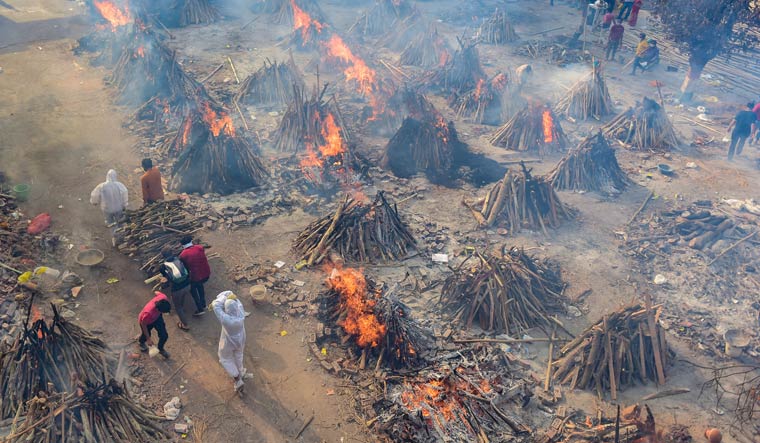 (File) Mass cremation of people who died of Covid-19 coronavirus at a cremation ground at Ghazipur, in New Delhi | PTI

In a media note issued on Monday, Priyanka writes, “…the Modi Government’s attitude towards data was to utilise it as a propaganda tool rather than an invaluable weapon in the fight against COVID-19. Its propaganda machinery repeatedly indulged in the suppression and manipulation of data to serve the government’s political agenda…”

Priyanka used the discrepancy of data between death certificates issued in some cities of Gujarat and of Uttar Pradesh to substantiate her charge.

Based on data ‘gathered from crematoriums and graveyards’, the note points to great differences between the official figures of deaths and the number of officially reported COVID deaths. Between April 30 to May 5, the official number of COVID-19 deaths in Varanasi was 73, while data of funerals and burials was 413, that is more than 5.5 times. In Gorakhpur, between April 25 and May 5, the official number of COVID-19 deaths was 28, while figures from crematoria and graveyards stood at 626, which is more than 22 times the official record. For the same period in Lucknow, the discrepancy is 4.3 times, in Kanpur 3.6 times, in Jhansi 6.8 times and 4.8 times in Meerut.

In Gujarat, the greatest discrepancy of figures comes from Rajkot where figures from graveyards and crematoriums were 52 times those reported as COVID-19 deaths in official figures. Though there are no definite dates given for these numbers, the note says that they pertain to the figures for 71 days in the second wave.

Priyanka has pointed out “... from the beginning of the pandemic, deaths and infections were reported as a ratio of our population while testing was reported as an absolute figure. This was designed to mislead the public into believing that the infection and death rates were not alarming, while the testing rates were sufficient. In fact, it was exactly the opposite. The Modi government seems to be following the exact same pattern as regards data surrounding the vaccination program today”.

For Uttar Pradesh, she writes, “…the government presented RT-PCR and antigen test data together in order to manipulate the truth. In fact, it is widely known that antigen tests are unreliable in comparison. In UP even now, the ratio of RT-PCR tests versus antigen tests is 65:35 per cent. Both ‘infections’ and ‘actual number of deaths’ have been actively suppressed by the government in an effort to save face.”