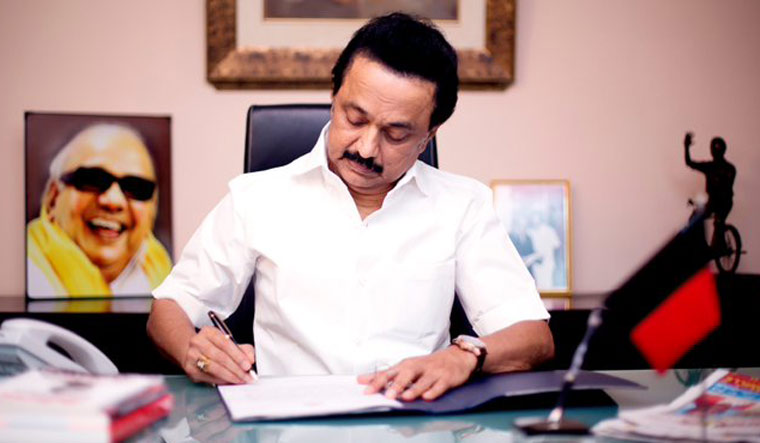 On June 3, when Tamil Nadu Chief Minister M.K. Stalin was going around Chennai to pay tribute to his father, M. Karunanidhi, on his 98th birthday, Tamil Twitter was trending hashtags on the late DMK chief, sending a strong message that Stalin and the DMK’s return to power in Tamil Nadu will be more decisive for India in the next five years. The talk about social justice and the need for a federal structure and state autonomy has come up strongly than ever before.

Days before Tamil Nadu went to polls on April 6, in an interview with THE WEEK, Stalin had said he was firm on protecting state’s rights. “We will raise voice for our (state) rights. We will extend a friendly hand for relationship,” he said in the interview. And now, just three weeks after taking over as the chief minister of the state, his government has began reviving the fight for federalism and state autonomy.

It all began on May 2, when Stalin replied to the wishes from Prime Minister Narendra Modi and Home Minister Amit Shah mentioning the term “union government”. A week later, again when Union Minister for Education Ramesh Pokhriyal called for a meeting with the education department secretaries of the state to discuss the New Education Policy, the school education minister in Stalin’s cabinet chose to boycott the event. He said it cannot be official-level talks when there are elected representatives. Two days later again, Higher Education Minister K. Ponmudi said a firm “no” to the Centre on NEET exams.

In a meeting of state education ministers to discuss the conduct of class 12 exams for CBSE, Ponmudi said that NEET should be done away with and that “Tamil Nadu would conduct the entrance tests, if required, to medical admission on its own for the colleges under the control of the state”.

And a sharp attack came from state Finance Minister P.T.R. Palanivel Thiagarajan during the GST council meeting. Thiagarajan harped on federalism and reminded the Union government that there is no Union without states. In the meeting chaired by Union Finance Minister Nirmala Sitharaman, Thiagarajan asked the “Union government” not to function as a “begrudging donor”. The major part of Thiagarajan's speech was dedicated to impart lessons on federalism. "As much as the Union is an integral (in bringing together one nation), it is also a derivative (citizens, elected representatives and even officers of the government, each come from a state), there is no union voters,” he said.

Thiagarajan and even M.K. Stalin were trolled by the BJP supporters on social media. A few BJP MLAs in Tamil Nadu even tried to divert the issue, saying Thiagarajan had insulted the Goan transport minister during the meeting. Meanwhile, BJP’s state unit president L. Murugan advised the state government by saying, “if you are in a cordial relationship with the Centre, Tamil Nadu benefits.”

But the DMK government continues to stand firm on its principles of federalism and state autonomy. In fact, state autonomy had been the age-old demand of DMK and it has returned to become the focal point after Stalin took over as the chief minister. While DMK had revived its fight for federalism since 2009, even when it was part of the UPA government, the party under Stalin has sharpened its state autonomy weapon. Under Stalin, the DMK took it forward when Stalin opposed the biased Terms of Reference (ToR) of the 15th Finance Commission in 2018. He then wrote to the chief ministers of all non-BJP ruled states to join with the DMK in advocating federalism. Even during the scrapping of Article 370 in Kashmir, DMK raised its voice against the Narendra Modi government for not hearing the people of Kashmir.

And now, just before the elections, the DMK took a firm stand through its manifesto: To bring education from the concurrent list to state list and perceived a conflict in the introduction of NEET, UDAY scheme, one nation-one ration card scheme, smart city projects and National Food Security Act.

The statements and comments have revived the talks of federalism, which the DMK has been advocating for decades, across the country. In fact, neighbouring states of Tamil Nadu like Kerala, Karnataka and Andhra Pradesh too have started talks about state rights. Incidentally, Andhra Pradesh Chief Minister Jagan Mohan Reddy voiced criticism of the Union government’s vaccine policy.