Bandyopadhyay was not there to receive Modi, nor did he attend the review meeting 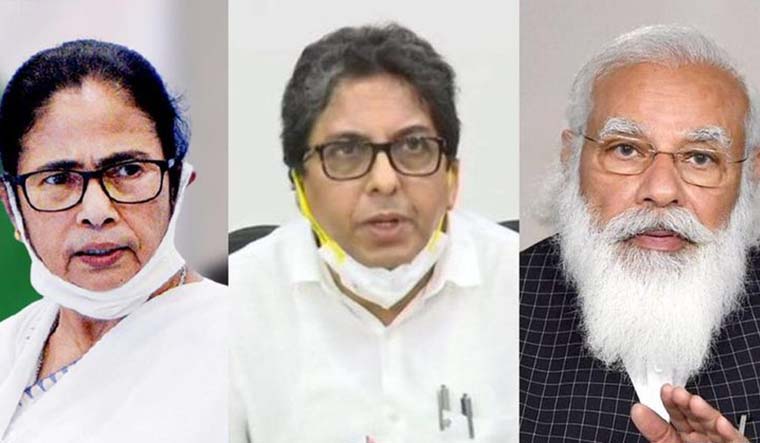 In an unprecedented move, the Union government recalled West Bengal Chief Secretary Alapan Bandyopadhyay and asked the state government to relieve the officer immediately with a direction to him to report in Delhi on Monday.

Bandyopadhyay, a 1987-batch IAS officer of West Bengal cadre, was earlier due to retire on May 31 after completion of 60 years of age. However, he was granted a three-month extension.

The move comes hours after he did not turn up to receive Prime Minister Narendra Modi at Kalaikunda, and also did not attend the meeting convened later by the PM to review the post-Cyclone ‘Yaas’ situation in the state.

Chief Minister Mamata Banerjee had met Modi at Kalaikunda and apprised him of the situation, and also sought a relief package of Rs 20,000 crore for the state. She, however, skipped the review meeting and went to Digha to “review the relief and restoration work” there. Banerjee’s decision to skip the meeting convened by the PM, was slammed by BJP leaders, including Home Minister Amit Shah and BJP chief J.P. Nadda.

The Centre’s move to recall Bandyopadhyay is believed to be in response to Banerjee’s action earlier today.

In a communiqué to the state government, the Personnel Ministry on Friday said the Appointments Committee of the Cabinet has approved the placement of the services of Bandyopadhyay with Government of India as per provisions of Rule 6 (1) of the Indian Administrative Service (cadre) Rules, 1954, with immediate effect.

"Accordingly, the state government is requested to relieve the officer with immediate effect and direct him to report to the Department of Personnel and Training, North Block, New Delhi by 10 am on May 31, 2021," it said.

Bandyopadhyay took over as the chief secretary of West Bengal after Rajiv Sinha retired in September last year.

Meanwhile, a release issued by the Prime Minister's Office said Modi has announced a financial assistance of Rs 1,000 crore for immediate relief activities, of which Rs 500 crore would go to West Bengal. Modi also declared ex-gratia of Rs 2 lakh to the next of kin of the deceased and Rs 50,000 for those seriously injured in the cyclone, the release said.

Cyclone 'Yaas' rampaged through parts of India's eastern coast on Wednesday, killing at least four people and forcing more than 21 lakh people to be evacuated to safe shelters in West Bengal, Odisha and Jharkhand.

(With inputs from PTI and Rabi Banerjee)