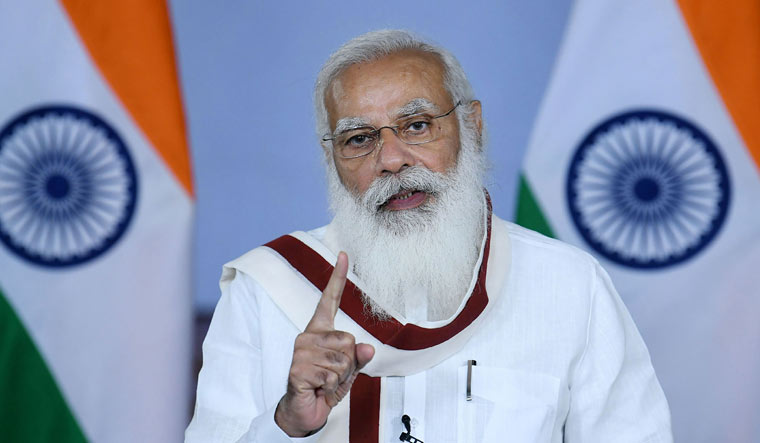 Prime Minister Narendra Modi will visit Odisha and West Bengal on Friday to review the impact of cyclone Yaas on the two states. The prime minister will first visit Bhubaneswar where he will hold a review meeting, and then proceed for an aerial survey in the affected areas of Balasore, Bhadrak and Purba Medinipur.

He will then hold a review meeting in West Bengal, reports news agency ANI.

Cyclone Yaas pounded parts of India's eastern coast on Wednesday, killing at least four people and forcing more than 21 lakh people to be evacuated to safe shelters in West Bengal, Odisha and Jharkhand.

West Bengal Chief Minister Mamata Banerjee said nearly 10 million people were affected and as many as 3,00,000 houses were damaged in the state due to the impact of the cyclone. According to the CM, as many as 15,04,506 people were moved to safer places in the state.

According to Indian Meteorological Department (IMD), the cyclonic storm weakened into a deep depression over southern Jharkhand and adjoining Odisha, and is expected to move to northwestward and weaken into depression later on Thursday.

The cyclonic storm ‘Yaas’ weakened into a deep depression over southern Jharkhand and adjoining Odisha late on Thursday, according to the Indian Meteorological Department (IMD). It is likely to move northwestward and gradually weaken into a depression later today, the IMD said.

Meanwhile, a spokesperson for UN Secretary General Antonio Guterres said the world body and its agencies stand ready to support the response efforts if state authorities request it, while expressing concern that the absence of social distancing in emergency shelters and temporary suspension of vaccination campaigns amid the COVID-19 pandemic could further complicate the health crisis.

'Yaas' is the second cyclonic storm to hit India within a week after 'Tauktae' tore into its western coast, causing death and destruction.