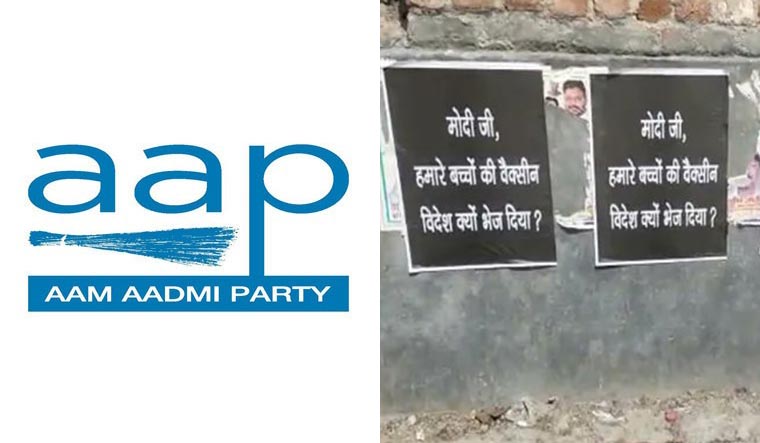 Collage: The Aam Aadmi Party's logo, a photo of the posters on a wall in New Delhi, shared by TMC MP Mahua Moitra on her Twitter handle

Aam Aadmi Party (AAP) leader Arvind Gautam was behind the posters critical of Prime Minister Narendra Modi and the COVID-19 vaccination drive that surfaced in the Mangolpuri area, the Delhi Police claimed on Sunday, a day after it arrested 25 people for allegedly pasting them on walls across the city amid the coronavirus-induced lockdown.

Gautam is absconding, the police tweeted.

"Police while patrolling to enforce lockdown announced by DDMA, created by GNCTD, noticed walls in several areas being defaced by pasting posters. Accused persons on questioning told an AAP member &amp; President of Ward 47, Arvind Gautam was behind it in Mangolpuri. He is absconding," tweeted the Delhi Police, which comes under the Union Home Ministry.

The police alleged that AAP leaders were involved in pasting the posters in other parts of the national capital as well.

The police have registered 25 FIRs and arrested as many people for allegedly pasting the posters, reading "Modiji humare bachhon ki vaccine videsh kyun bhej diya (PM why did you send vaccines meant for our children to foreign countries)", in several parts of the city.

The FIRs were registered under sections 188 (disobedience to order duly promulgated by public servant) of the Indian Penal Code and other relevant sections, including section 3 of the Prevention of Defacement of Property Act, across various districts of the Delhi Police, officials had said.

The AAP on Sunday owned up its role behind pasting the posters.

"The AAP is behind the posters. Our party workers have been arrested and hundreds are being detained in different parts of the city. We challenge Delhi Police to arrest senior AAP leaders and party MLAs instead of harassing poor people who paste posters for a little money," said senior AAP leader Durgesh Pathak.

According to the police, an FIR was registered under relevant sections at Mangolpuri police station earlier this week for defacement of wall adjacent to Kanjhawala Road.

There was no details of printing press or publisher mentioned on these posters. From a video footage, those who were pasting these posters around 4 am were identified, the police said.

The accused persons disclosed during interrogation that Gautam, who is a worker of AAP at Sultanpur Majra, had sent instruction on WhatsApp to one Rahul regarding the subject matter of printing and Rs 9,000 for printing and affixing these poster or hoarding, they said.

Rahul (26), a resident of Mangolpuri, made a graphic image for printing and placed the order with Rajesh via email. Rahul runs a graphic designing shop, police said.

One Anil Kumar (25), a resident of Sultanpuri, is an e-rickshaw driver from whom the hoardings were recovered, police said.

Rajesh Sharma (48), a resident of Mongolpuri, is the owner of Addline printing press. This order was given by Rahul via email to Rajesh. The printer did not mention the name of press in the footnote of the printed material and violated the DDMA guidelines for running press in this lockdown period, police said.

The Delhi Police has registered the 25 FIRs across its 13 districts, including Outer, South and West, in the national capital.

On Wednesday night in South district, similar posters were found pasted in the area of JJ Colony Khanpur. Thereafter, a case was registered at Neb Sarai Police Station, police said.

During investigation, two suspects were seen in CCTV footage carrying the posters or hoarding from a street of JJ Colony Khanpur. From local inquiry, the persons were identified as Santosh and Mayank. From their interrogation it is revealed that one Sanjay Chaudhary (ex-councilor candidate of AAP) was behind the pasting of these posters, a senior police officer said.

He had directed his party worker Mayank (42), a resident of Khanpur Extension, to get these posters printed and pasted in the area, police said.

During further investigation, it was revealed that it was being done on the directions of Prashant Kumar, a resident of New Moti Nagar. He is an AAP worker associated with party leader Rakesh Joshi, the police said.