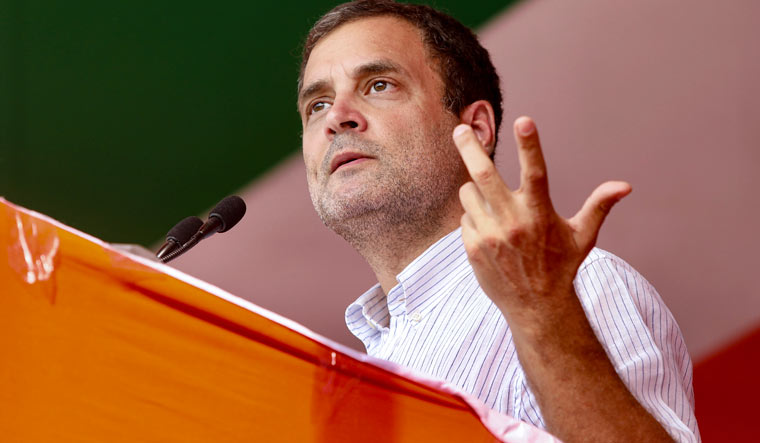 The Congress on Saturday accused the Centre of abject failure in protecting the lives of people and urged it to follow the suggestions of experts by declaring a national lockdown in the wake of rising cases of the novel coronavirus infection.

"Vaccine budget- underutilized. Human life- undervalued. Because PM''s ego- overinflated," he tweeted, tagging a media report which claimed that only Rs 4,744 crore has been utilised from the vaccine budget of Rs 35,000 crore.

In another tweet in Hindi on GST on COVID-19 vaccines, Gandhi alleged, "People''s lives may be lost, but PM''s tax extortion should not".

In yet another tweet, he said, "The Movid pandemic” and tagged a small video titled "Modi hai to mumkin hai" which showed a rising graph of COVID-19 cases and a declining graph depicting the vaccination plunge.

Congress senior spokesperson Ajay Maken quoted a report from The Lancet journal which claimed that “India will see a staggering one million deaths from COVID-19 by August 1”.

He said the report also said that “if that outcome were to happen, Modi government would be responsible for presiding over a self-inflicted national catastrophe”.

The Congress leader further said the Indian Medical Association (IMA) and The Lancet have made several suggestions similar to those made by his party leaders.

"If the IMA and reputed journals like The Lancet are suggesting imposition of a national lockdown, the government should impose the lockdown, but with Nyay-like schemes providing Rs 6,000 per month to the poor to tide over the crisis," he said at a virtual press conference.

Maken asserted that it is the duty of the national government that people should neither die of the pandemic nor of hunger.

Congress leader Jairam Ramesh also hit out at the central government over The Lancet report.

“The government’s drumbeaters used editorials of the most prestigious Lancet to shower themselves with praise earlier. Now this….,” he tweeted and tagged the report.

Maken said the IMA has suggested that the Union health ministry should be revamped with a new minister in place, raising health budget to 8-10 per cent of GDP and universal vaccination.

He urged the Delhi government to decentralise and learn from Mumbai and Rajasthan in providing better health infrastructure, as he said the AAP dispensation failed to set up even one PSA oxygen plant in the national capital in the past year.

The Congress spokesperson also welcomed the setting up of a national task force by the Supreme Court on oxygen distribution, saying the top court had to intervene after the central government "completely failed" in its duties.