Ensure medicines, equipment for COVID not sold above MRP: HC to Delhi govt 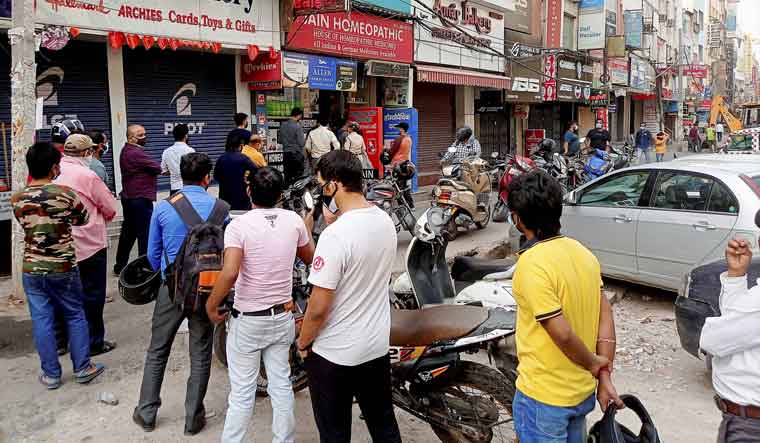 New Delhi: People stand in a queue to buy medicines outside a homoeopathic pharmacy during the COVID-induced lockdown, in New Delhi, Friday, April 30, 2021 | PTI

The Delhi High Court on Sunday directed the Delhi government to ensure that medicines and equipment like oxygen cylinders and concentrators needed for COVID-19 treatment not be sold above the maximum retail price (MRP).

A bench of Justices Vipin Sanghi and Rekha Palli directed the government to book those persons found hoarding or black-marketing medicines and equipment related to COVID-19 and be brought before the court for taking independent contempt action against them.

The direction was issued after the court was informed by some lawyers that there was rampant overcharging of medicines and equipment.

Subsequently, senior advocate Rahul Mehra, appearing for the Delhi government, told the court that Delhi Police has set up a helpline -- 33469900 -- for receiving complaints about malpractices like overcharging for ambulances, hoarding or black-marketing of medicines, equipment.

He urged the court to direct that the helpline be widely publicised so that people can inform authorities about such unscrupulous activities and action can be taken against the same.

Taking note of the submission, the court directed the Government of National Capital Territory of Delhi (GNCTD) and police to give wide publicity to the helpline number.

The issue regarding overcharging, hoarding and black marketing of medicines and equipment related to COVID-19 was brought to the attention of the bench during hearing of an application moved by the Centre for recall of the court's May 1 direction to it to supply the entire oxygen allocated to Delhi.

The court had also warned of initiating contempt action against officials concerned, if the oxygen was not supplied, and the Centre wanted recall of that observation as well.