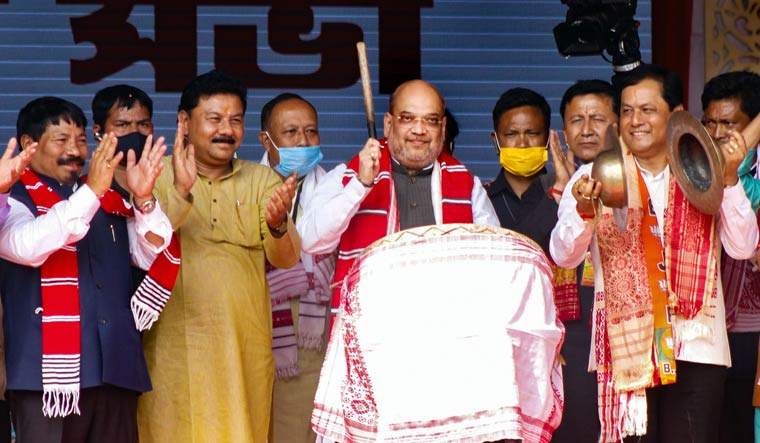 The BJP on Friday exuded confidence of returning to power in Assam for a second straight tenure, making a projection of bagging 83 assembly seats along with its alliance partners, the AGP and UPPL.

Addressing a press conference, state BJP president Ranjit Kumar Dass said the saffron party is set to win 70 seats, while the Asom Gana Parishad is likely to emerge victorious in eight seats and the United Peoples' Party Liberal in five.

Elections to the 126-member Assam assembly were held in three phases on March 27, April 1 and April 6. "BJP is on course to form government in the state for the second time with the blessings of the people," Dass said.

Among 21 constituencies where the party has expressed "doubts" about winning, he said the BJP is likely to be victorious in at least three seats. "In the previous elections, our constituency-wise calculations were accurate, and we are hopeful that we will be correct this time, too," he said.

Giving more details on projections for region-specific constituencies, Dass said in the Barak Valley, which has 15 seats, the BJP will win in not less than seven, including Ratabari, Algapur, Silchar, Sonai and Dholai.

In the Brahmaputra Valley, he claimed that the BJP will bag all the five constituencies in the hill districts of Karbi Anglong and Dima Hasao, Haflong, Bokajan, Howraghat, Diphu and Boithalangsu. Dass said the AGP is expected to secure victory in Bongaigaon, Guwahati East, Tezpur and Bhavanipur, and the UPPL is expected to win in Sidli, Tamulpur, Barama and Chapaguri.

Asked about the predictions of exit polls, some of which showed BJP forming government again in Assam, he said "the party neither accepts or rejects the surveys, as each of them have different parameters to come to a conclusion".