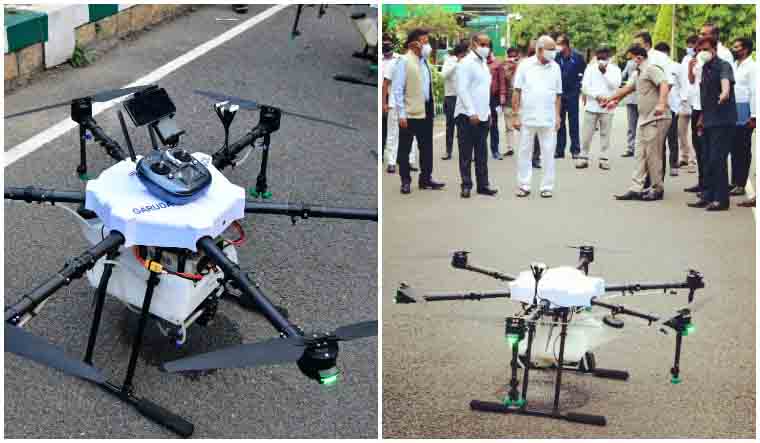 Karnataka is hoping to adopt drone technology to deliver COVID-19 vaccines to remote areas, medicines in containment zones and to sanitise the primary health centres in the state.

Chief Minister B.S. Yediyurappa launched the drone-based sanitization of public places and drone delivery of medicines on a trial basis in the city on Friday.

A taskforce headed by Bengaluru central MP P.C. Mohan has roped in Garuda Aerospace, a startup company to run the pilot project in the city on Tuesday, which will cover Gandhinagar, Chamrajpet, Shivajinagar, Shantinagar, C.V. Raman Nagar, Sarvajna Nagar, Mahadevapura and Rajajinagar areas.

"With a sudden surge in COVID-19 cases in the state, there is an increasing demand for the COVID vaccines from PHCs in remote villages.  As frontline workers who carry the vaccines could be carriers of the virus, the drones help us eliminate human contact," said Mohan.

The Garuda Aerospace has developed a highly specialised delivery drone – “The White Knight”, which is capable of carrying 35-40kg of payload. It is equipped with a temperature-controlled module and an endurance capacity of two hours. The trials were conducted in Tamil Nadu last year.

Recently, the DGCA granted a conditional exemption to ICMR for testing the feasibility of drones delivering vaccines and permitted 13 consortiums to conduct BVLOS (BeyondVisual Line of Sight) operations last year, opening up several possibilities of drone delivering food, medicines, packages and even people in the air taxis. Garuda Aerospace is part of AIDAT, one of the consortiums permitted to conduct these trials.

"The startup guided by Agni mission and Invest India, works directly under the supervision of the principal scientific adviser to the Prime Minister and has been at the forefront of utilising drones during the Covid-19 pandemic in 2020. It has supported the NDRF in the glacier burst disaster in Uttarakhand earlier this year," said Agnishwar Jayaprakash, founder and CEO of Garuda Aerospace.