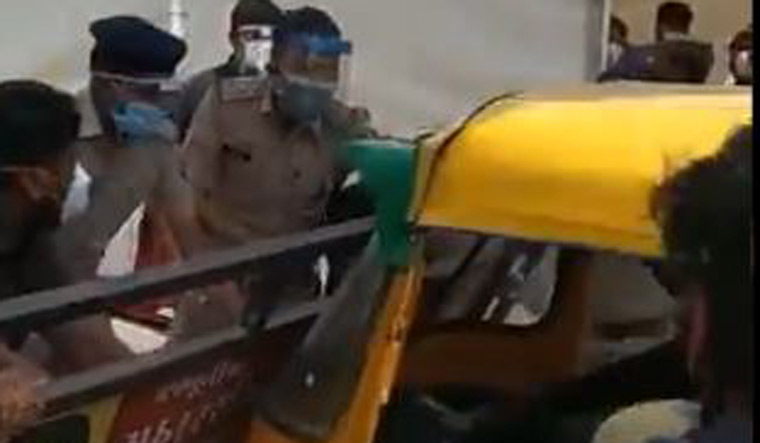 Barely a week ago, Union Home Minister Amit Shah had participated in the inauguration of a brand-new COVID-19 hospital in Ahmedabad.

The 900-bed Dhanvantari COVID Hospital was set up at the premises of the Gujarat University Convention Centre in Ahmedabad jointly by the DRDO and Gujarat government. The facility started functioning on April 25.

However, media outlets and social media users had claimed that admissions of COVID-19 patients to the facility and other hospitals were proceeding slowly.

The chief minister's office had announced that only referral patients would be admitted for treatment in the DRDO Hospital under the '108' centralised system. This meant a patient had to arrive in a '108' ambulance to get admitted. This system had led to complaints that many COVID-19 patients were being turned away.

On Thursday afternoon, video clips started circulating on social media of the family of a COVID-19 patient using an auto-rickshaw to barge the barricade of the DRDO Hospital in order to gain admission. The shocking footage showed security personnel attempting to hold the barricade up. Dr Manish Doshi, the chief spokesperson of the Gujarat Congress unit, was among those who shared the video clip.

News 18 reported that the family had been waiting for three days to gain admission to the DRDO Hospital.

Gujarat reported 14,120 new COVID-19 cases on Wednesday, while 174 people succumbed to the infection, the highest single-day fatalities so far. With the addition of 14,120 new patients, the state's tally of coronavirus cases rose to 5,38,845.