UP: Why this mother had to take her kids on panchayat poll duty 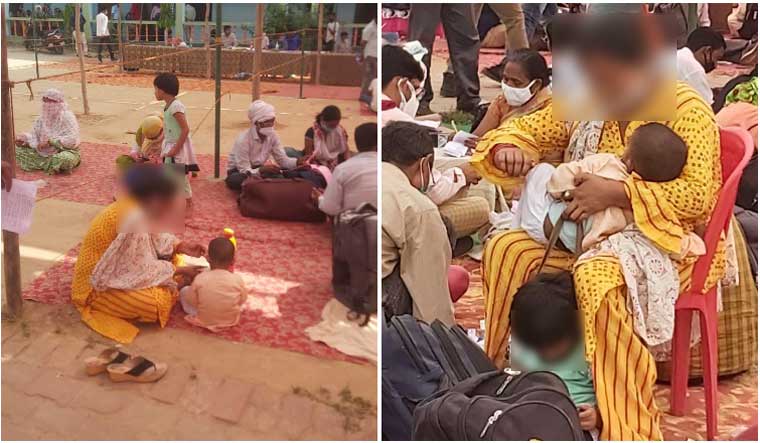 Officials on panchayat poll duty in Uttar Pradesh are in a dilemma amid the raging COVID-19 pandemic, as some of them are being forced to take their children along as there is no one at home to look after them.

On Sunday, Chief Minister Yogi Adityanath appealed to the people that those below 10 years and above 60 years should not step out of their houses in the wake of the rising number of COVID-19 infections.

However, a teacher in Misrikh block of Sitapur said that she had tried to get her duty cancelled as she has a one-and-a-half-year-old son at home but her request was turned down by the District Magistrate.

“I have left my son with my mother. We were to report for duty at 10am today (Wednesday) and will be free only by 9pm tomorrow (Thursday). I am very scared for myself and my family. There are no special arrangements made for us,” said the teacher who did not wish to be named.

At the Pandit Sanotshi Lal Shukla Memorial Inter College of village Chandpur Bazaar, where this teacher and others on poll duty had gathered before being dispatched, there was one teacher who had come with her two children—the younger one nestled in her lap as she sat under a canopy at the grounds of the inter college.

Polling for the four-stage panchayat poll kicked off in the state on April 15 and will end on April 29. The elections are to elect pradhans for all gram (village) panchayats, members of the kshetra (area) panchayats and district panchayats. Though panchayat elections are not held on party symbols, this election has been keenly contested with the state’s ruling BJP issuing directives that all those holding party posts be barred from contesting them.

On Tuesday the High Court issued a notice to the Uttar Pradesh State Election Commission, taking cognisance of the death of 135 teachers, para teachers and investigators assigned to panchayat poll duty. The court asked why the UPSEC had failed to comply with COVID-19 protocols during the polls. It had directed immediate compliance of all COVID-19 protocols in the remaining phases of the elections.

April 29 is the last phase of polling. Sitapur is one of the 17 districts that go to the polls in this last phase. Counting of votes will take place on May 2.