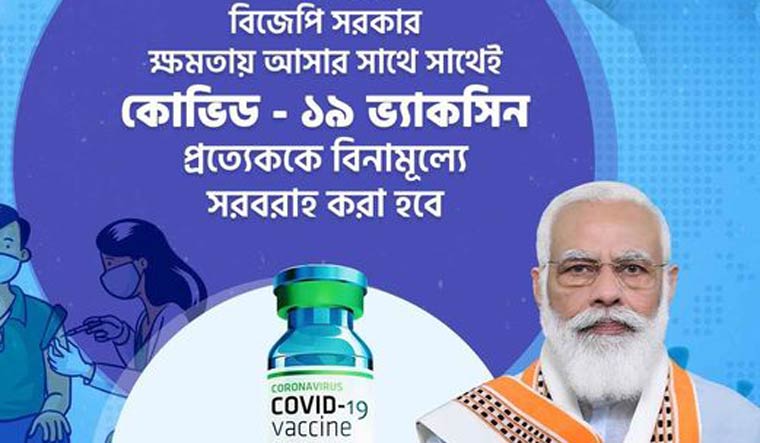 Ever since the Narendra Modi government announced earlier this week state governments could procure COVID-19 vaccines on the open market, the Centre has faced criticism.

Opposition parties have accused the BJP government of effectively abandoning the state governments to deal with the financial implications of procuring vaccines. Since then, a number of state governments such as Madhya Pradesh, Chhattisgarh, Jharkhand, Uttar Pradesh, Assam and Kerala have said COVID-19 vaccines will be given free of cost to all their residents who are above 18 years of age.

Not surprisingly, the ruling Trinamool Congress berated the BJP, calling the promise a jumla (false promise). The official Twitter handle of TMC stated, "Here comes the free vaccine JUMLA announcement from Bharatiya Jumlebaaz Party @BJP4Bengal! Similar promise was made by them to fool people in Bihar before elections, which they have conveniently forgotten. Bengal won’t be fooled.

DO NOT TRUST BJP!"

BJP Rajya Sabha MP Derek O'Brien put up a video clip in which he said "Nothing happened (in Bihar)... Elections finished, they forgot. Same thing they've done (in West Bengal): Free vaccine jumla... vaccines for all in Bengal. Don't believe the BJP. Don't trust the BJP."

Interestingly, on Thursday, West Bengal Chief Minister Mamata Banerjee told a rally in South Dinajpur that all eligible people in West Bengal could avail of the vaccine free of cost from May 5, after declaration of election results on May 2. Mamata had bitterly criticised the Centre over its vaccine pricing policy and demanded it fix "one price" for the vaccine.

Ever since the Modi government announced the revamped vaccine policy, the BJP has been reminded of its previous claims on free vaccination. Most notably, in October last year, the BJP promised free COVID-19 vaccines in Bihar if the NDA won the Assembly election. Finance Minister Nirmala Sitharaman, who released the BJP manifesto for Bihar, was quoted by NDTV as saying, "A party can announce what it wants to do when it comes to power. That is exactly what is announced. Health is a state subject. It is perfectly in order."

In October itself, Union Minister of State Pratap Sarangi, had declared all Indians would get the COVID-19 vaccine free of cost and claimed approximately Rs 500 would be spent on vaccinating each individual.

In early January, Health Minister Dr Harsh Vardhan assured vaccines would be given free of cost for all.