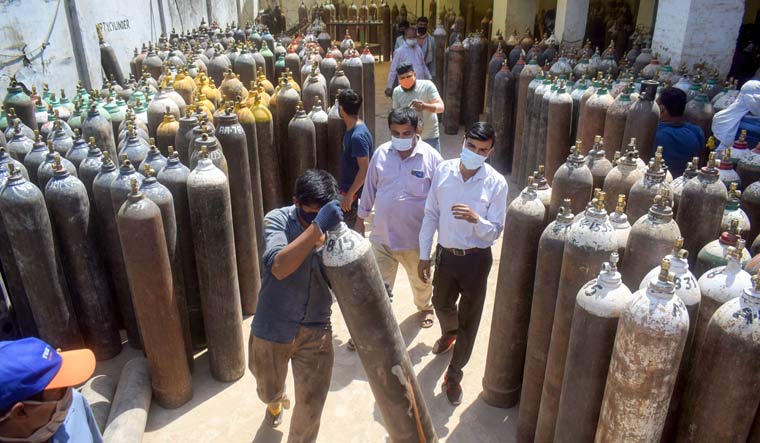 25 of the sickest patients in the national capital's Sri Ganga Ram Hospital died in the last 24 hours, while the hospital signalled an SOS for more oxygen cylinders. "Oxygen will last another two hours, and we need it to be airlifted immediately. Ventilators are not working effectively, and lives of another 60 sickest patients are in peril," news agency ANI quoted the director general of the hospital as saying. "We are resorting to manual ventilation in the ICUs and emergency departments."

At 8pm yesterday, Sir Ganga Ram Hospital had sent an SOS to the government, saying there was only five hours of oxygen left. "Oxygen in store is for five hours for peripheral use till 1am [Friday] and less for high flow use. Need urgent oxygen supplies," an official said. There are 510 COVID-19 patients, including 142 on high-flow oxygen support, admitted in the central Delhi hospital.

Hospitals in Delhi are struggling to replenish oxygen supplies for coronavirus patients amid massive shortages. While some of these hospitals have been able to make short-term arrangements, there is no immediate end to the crisis in sight, a government official said, reported news agency PTI.

The administration at Shanti Mukund Hospital, a 200-bed facility in East Delhi, even put up a notice at the entry gate, reading: "We regret we are stopping admission in hospital because oxygen supply isn't coming." A hospital official told PTI that their oxygen supplier could not be contacted. "There are 110 coronavirus patients in the hospital. We have no option but to send patients to other hospitals," he said. In the afternoon, officials at Saroj Hospital in Rohini said they had run out of oxygen.