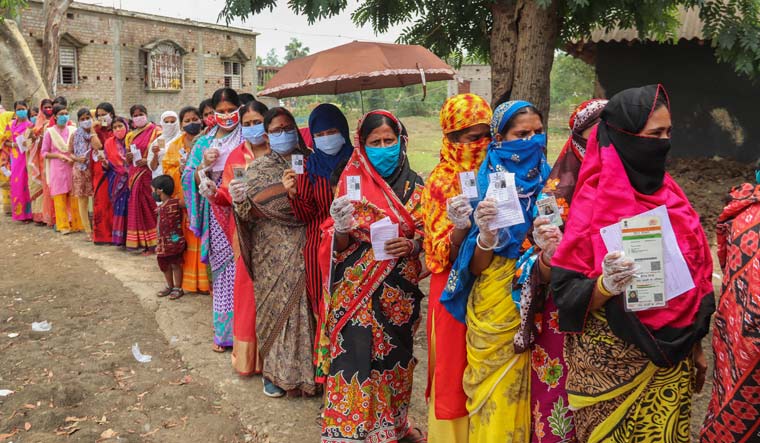 People stand in a queue to cast their votes during 6th phase of West Bengal Assembly Polls, in Burdwan | PTI

Nearly 80 per cent voter turnout marked the sixth phase of polling on Thursday in West Bengal assembly election, which was marred by sporadic incidents of violence, firing by state police and an assault on a candidate.

According to the EC 79.09 per cent voter turnout was recorded till 5 pm in 43 seats where polling was held and is expected to go up further as the polling ended at 6.30 PM.

Elections, which began at 7 am, were held in 43  seats -- 17 in North 24 Parganas district, nine each in Nadia- including Matua strongholds at Bongaon and Krishnanagar and Uttar Dinajpur and eight in Purba Bardhaman.

Matuas make for a large chunk of the state's scheduled caste population. With an estimated three million members, the community influences the outcome in 30-40 assembly seats in Nadia, North and South 24 Parganas districts.

Of the four districts that went to the polls Thursday, Nadia registered the highest voter turnout of 82.67 per cent, followed by Purba Bardhaman (82.15 per cent), Uttar Dinajpur (77.76 per cent) and North 24 Parganas (75.94 per cent).

At Bagda in North 24 Parganas, a mob of about 250 people attacked security personnel outside a booth. A huge police contingent was rushed to the spot to control the situation, the police said.

Police had to fire three rounds to disperse the mob and a person was injured. The officer in charge of Bagda police station and a constable were injured in the attack.

The EC has sought a report on the incident, which brought back memories of the fourth phase of polls held on April 10 when four persons were killed after CISF personnel opened fire in "self defence" outside a booth in Cooch Behar district's Sitalkuchi area.

In another incident in neighbouring Ashoknagar clashes broke out in the area between rivals TMC and BJP activists during which bombs were hurled, police said adding that unidentified people vandalised one vehicle carrying the central forces.

The TMC alleged that two of its activists were injured in firing allegedly by the central forces outside booth number 79 in Ashoknagar's Tangra area after a few party members protested against BJP candidate Tanuja Chakraborty's visit to the area.

"Two of my party colleagues are injured after bullets fired by central forces personnel hit them in their legs. Both are undergoing treatment in a nearby hospital," TMC candidate Narayan Goswami alleged.

The EC, which had sought a report from the officials posted in the district, later dismissed the allegations.

"There was no incident of any firing by the central forces. We have got no such report. This is a baseless allegation," a senior EC official told PTI.

In Ketugram assembly constituency in Purba Bardhaman, BJP candidate Mathura Ghosh was attacked by alleged TMC activists outside a polling booth. His vehicle was vandalised.

The TMC dubbed the allegations as baseless.

At Chopra in Uttar Dinajpur shots were reportedly fired after clashes broke out between activists of the TMC and BJP over allegations of heckling by agents of a polling booth.

Both the parties denied having used any firearm and blamed the opposition for the violence.

The office of the chief electoral officer has sought a report on the incident from the local administration.

At Raiganj in Uttar Dinajpur TMC claimed that one of its activists sustained serious injuries after BJP workers allegedly stabbed him. The saffron party has, however, denied the allegations.

Sporadic violence was also reported from Bijpur constituency in North 24 Parganas, where TMC and BJP supporters clashed outside polling booths. Both the parties accused each other of trying to rig votes.

Two supporters of TMC and three of BJP were reportedly injured in the clashes and a huge contingent of security forces was rushed to the troubled areas to control the situation.

At Halisahar area of Naihati constituency, the saffron party alleged that bombs were hurled at the residence of a local BJP leader, whose mother and younger brother are known to have suffered injuries. The TMC and the BJP traded charges against each other for the incident.

In a separate incident in the area, a TMC worker was injured after unidentified miscreants attacked him with sharp weapons.

The injured have been admitted to a nearby hospital, official sources said.

Film director-turned-TMC candidate Raj Chakraborty was gheraoed in Barrackpore constituency by BJP supporters, who accused him of influencing voters.

TMC supporters had a verbal duel with the central forces in Habra constituency of the same district when the party candidate and state minister Jyotipriyo Mullick visited a polling booth in the area.

In Dum Dum Uttar constituency, a scuffle broke out between TMC and BJP supporters when the ruling party workers opposed the visit of the saffron party candidate Archana Majumdar to the polling stations.

The day's polling by over 1.03 crore voters will decide the political fate of 306 candidates in this phase.

A total 1,071 companies of central forces were deployed to ensure free and fair polling in 14,480 polling stations of the 43 assembly constituencies.