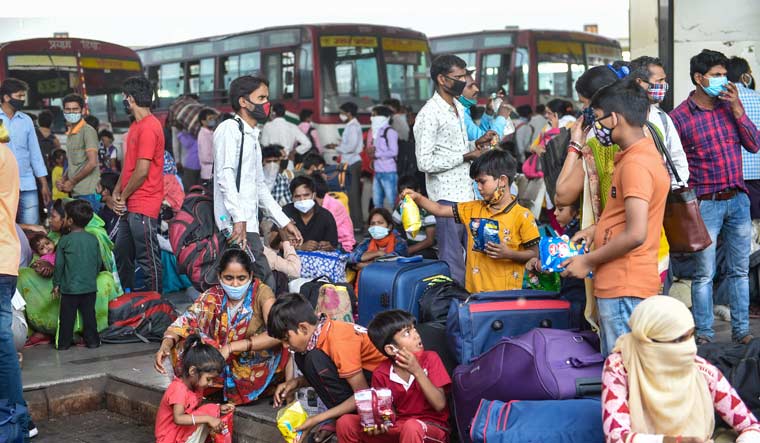 (File) Migrants wait to board a bus after UP Government imposed restrictions in view of surge in coronavirus cases, at Alambagh Bus Station in Lucknow | PTI

The COVID19 catastrophe in Lucknow is being fuelled by fear, lack of information, mistrust and greed.

Anurag Tiwari who works in the software industry at Noida, drove down to Lucknow on the night of April 17 as his parents, aged 70 and 62 years, were unwell. Within two hours of getting to Lucknow, he drove back with his parents, stalked by the fear that in a crisis he would not be able to find a hospital for them. “Everyone told me that Lucknow was hopeless. I had a better chance in the National Capital Region as the number of hospitals is more and information is better available,” he said.

In Noida, Tiwari’s mother, who is a diabetic, was admitted for emergency care while his father was isolated at home. Tests revealed that his mother was COVID-19 positive. “The hospital told me that they could not keep her in the emergency [ward] forever and I would have to look elsewhere. The hospital had beds for COVID patients but none were available at the time.”

For the next eight hours, Tiwari struggled. He registered his mother on the helpline of the Integrated Command Control Centre (ICCC), the centralised system for allocation of hospital beds. Tiwari called all possible contacts he could think of, including people who could reach Union ministers. When the ICCC allotted a bed to Tiwari’s mother, he reached there only to find that the hospital in question did not have any information about it. He had to check three more hospitals before his mother finally found a bed.

“To drive 1,000 kilometres and then struggle for hours to find a bed, the experience was terrible,” said Tiwari. He still believes that the advantage of the ICCC is that one gets some direction about where to go. “The helpline responders were calm and kept reassuring me,” he said.

Tiwari’s experience was relatively less harrowing in a state where no one seems to have a grip on the situation.

A large measure of the challenge is the lack of credible information. WhatsApp and social media forwards for availability of oxygen cylinders, plasma donors, home collection of samples for testing, medicines and even food services for isolated patients have mostly incorrect or fake contacts. Rumours, such as the Defence Research and Development Organisation (DRDO) operating a 300-bed COVID-19 facility, flow thick and fast. The facility is under construction.

Manish Pathak, the owner of a medical store in Lucknow’s Mahanagar area, said, “People have been buying medicines in bulk out of fear. It does not help that many shops in the wholesale medical market have downed their shutters as people working in them test positive.”

Remdesivir injections, the few that are available, are being sold at a minimum price of Rs 18,000, the normal cost being around Rs 5,000. These have also been scooped up, just as a precautionary measure, by those who could afford them. There is no unanimity though on the treatment protocol and the effectiveness of the drug. To stop this, a doctor’s prescription and a copy of the Aadhaar card of the buyer are now mandatory.

Oxygen cylinders are also at a premium. Oxygen cans—used for recreational oxygen therapy to combat problems such as those caused by high altitudes and pollution—are being purchased online in bulk.

Pradip Tiwari, the in-charge of the trauma unit at the Dr. Shyama Prasad Mukherjee Hospital, said, “Such cans provide relief for a very short time. Once a patient is at that stage, it is better to seek a hospital than try to manage him at home.”

The fear of catching the infection and dying unable to access medical facilities is so great that people are abandoning family members.

Versha Verma is a social worker, who has been ferrying the bodies of COVID-19 patients to the crematorium and performing their last rites. Verma said, “It is unbelievable how family members refuse to touch the bodies of their loved ones, yet they come out to shoot a video of us getting the body in our van. At one place, we hoisted up a very heavy body, but no family member offered to give us a hand even for a few minutes.”

Verma started off with four co-workers but now has just a driver who she is paying Rs 1,000 a day. The van has been hired for Rs 20,000 a month. As word of her work got around, people donated masks, gloves and other protective equipment to her.

Over the last week, there have been reports of overcharging for firewood to conduct cremations. However Verma said, “The Lucknow Municipal Corporation staff at the cremation ground is most helpful. No one acknowledges the massive good that they are doing at great risk to themselves”.

The second wave has hit Lucknow hard, with 5,902 infections being reported in the 24 hours ending at midday on Thursday. The crisis of the health infrastructure is, however, being compounded by many other emotions.