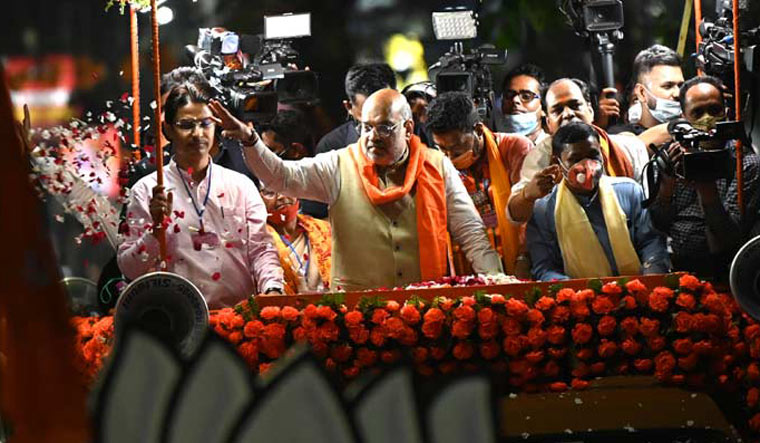 Amid a surge in COVID-19 cases, the BJP, on Monday, said it has decided against holding any big rally or public meeting, including by Prime Minister Narendra Modi and other party leaders, in the ongoing West Bengal assembly polls campaign.

The decision comes amid the party facing flak from rivals for the big rallies of its leaders in West Bengal amid the COVID-19 tally rising to staggering levels across the country.

The BJP said breaking the chain of coronavirus infection is much needed in such a difficult time and it will leverage its "massive digital footprint" to take across the message of its top leaders to the voters.

Prime Minister Narendra Modi and other BJP leaders will be addressing only small public meetings to be attended by maximum of 500 people, the party said in a statement.

Congress leader Rahul Gandhi has already cancelled his rallies in West Bengal while the ruling Trinamool Congress president and the state's Chief Minister Mamata Banerjee has said that her party would organise small meetings in Kolkata and she would give short speeches in rallies in districts where polling would be held in the remaining three phases.

The BJP said all its public meetings will be held in open places following all COVID-19 guidelines and that it will distribute six crore masks and sanitisers in the state.

The party asserted that it is also very necessary for the constitutional and democratic obligations to be fulfilled, noting that the assembly polls are underway in the state.

Amid a massive surge in the COVID cases, the BJP said the country had earlier overcome big challenges under Modi and will do it again.

BJP's IT wing head Amit Malviya, also the party's co-incharge for the state, said the BJP will leverage its "massive digital footprint" and take the message of Modi and other leaders to lakhs of people.

"We did that successfully during Bihar elections, which too was conducted under the cloud of COVID-19. The opposition had then complained that it gave us an edge," he said.