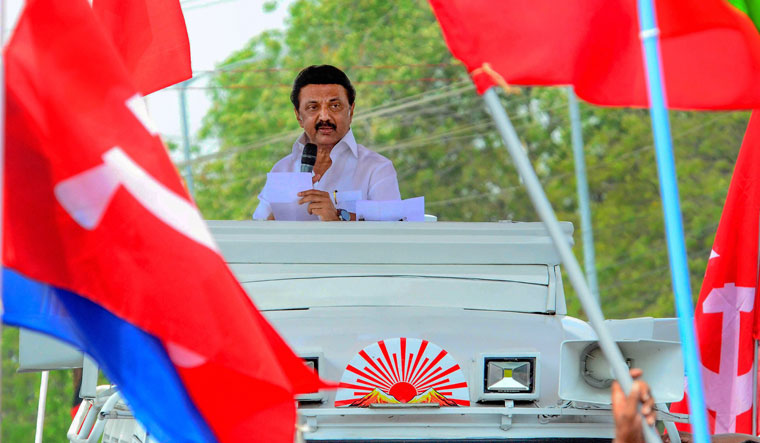 [File] Stalin at an election rally in Thoothukudi | PTI

DMK chief M K Stalin on Wednesday batted for universal vaccination for COVID-19 and blamed the Centre's 'lackadaisical' attitude and 'careless' administration for the second wave of the pandemic sweeping across the country.

The Leader of Opposition in Tamil Nadu Assmbly alleged that the vaccines were not brought to use on time for people and slammed the export of over five crore doses to other countries.

"The BJP government's lackadaisical attitude and careless administration are the reason for the second wave effecting such severe impact in the country, including Tamil Nadu," Stalin claimed.

In a statement, he also slammed the export of 5.84 crore doses of vaccines.

By naming the latest vaccination drive as "tika utsav", Prime Minister Narendra Modi was "diverting" his government's "laxity" on the handling of the mattter, he alleged.

"He (Modi) has not so far come forward to decide on vaccinating all. Despite requests from all political parties, he is busy with election campaign for the BJP in West Bengal," Stalin said.

It was a matter of concern that at a time when there should have been a universal vaccination programme vis-a-vis COVID-19, only a targeted inoculation drive was on, he added.

After starting off with senior citizens and those with comorbidities in the 45-59 year-age group, the government has now extended vaccination to all above 45.

Stalin also wondered if Tamil Nadu had been provided with adequate doses of the vaccines, amid reports that fewer people had come forward to take the jab.

He said if there was no proper public response to vaccination, the blame lies with the Centre and the state government for not creating adequate awareness.

"With corona spread happening at a very fast pace in the state, the BJP government, especially PM Modi, should take a policy decision of vaccinating all and send sufficient doses for Tamil Nadu," he said.

Stalin also urged the people of the state to come forward to take the COVID vaccines and follow related health protocols such as hand hygiene.